Can we get a “Move to outdoors.SE” option?

Travel.SE and outdoors.SE have overlap. Some question may fit on either site, or may be a better fit on one than on the other. For example, I wanted to propose to move this question on skiing to outdoors.SE, where I feel it belongs better.

Can we get an option belongs on outdoors.stackexchange.com when proposing to close a question as off-topic?

I'm not sure if the particular question is off-topic. I don't think it is, I just think it would be more on-topic on outdoors.SE, and outdoors.SE badly needs more traffic to their site.

Well it got migrated anyway, so that's fine. However, I felt 2 points were worth raising:

1) Just because it's more on-topic on one site doesn't make it any less on-topic on another site necessarily. We had a question on travelling to see the eclipse, or another on travelling to see auroras. One might have gone to the astronomy.se site to raise it, or the travel one. And it would have been equally valid to ask either question on either SE site. (Well actually that wouldn't be for me to say - they're valid on here, and I suspect they'd be valid on the other SE site). We shouldn't move something just because it's more appropriate elsewhere if it's also appropriate here - think from the new user's point of view - if they asked the aurora question after signing up, then come back to find their question has been sent elsewhere, it gives the impression they've done something wrong, AND they have to make an account on the other SE site. Now if it's genuinely in the wrong place, sure, we'll move it, and please do flag it for us.

2) Migrating traffic to another SE site because they need traffic is NOT a valid reason to migrate it either. They'll grow if successful, and they won't if not. It took us a long time to increase our traffic and it required a lot of hard work making sure we had the right questions on here as well. Some SE sites were apparently 'too niche' - one I'm particularly disappointed about was Astronomy.SE - but it didn't get the input desired during its time in beta - which is why we have betas, and it was closed down. By all means ask questions and answer questions and contribute to all betas, but we shouldn't be farming questions out to them as it dilutes the pool of sites as well as what makes us distinct. 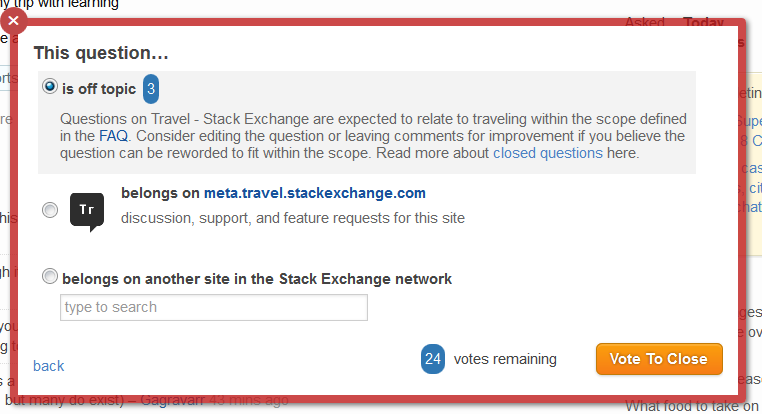 I don't know whether non-moderators can see this, but I get an option to type in a name for a website on the StackExchange network to migrate to (as shown above). If you cannot see this, I'm guessing it's because you don't have enough reputation (yet!).

So far we have only one migration target: Meta.Travel.SE. IMHO this is far too minimalistic. I think we could add Outdoors to the list of target sites, since we do share some scope and we've had questions migrated to and from them.

Not the answer you're looking for? Browse other questions tagged discussion feature-request closed-questions migration .

4
Is it necessary to migrate questions that are in scope for travel but also within scope of other StackExchange sites?
6
Travel vs. Outdoor SE, or, do we need the [outdoor-activities] tag?
7
Is it okay to refer off-topic questions to Quora (e.g. immigration/expat questions)?
3
Please migrate this thread to Expats
9
How to ask: Interesting places
1
Should we migrate all non-site-specific, general questions about how SE works to the main Meta SE?
2
Can visa related questions can be re-asked after minimum time lapse?
13
Migration path between Travel and Expatriates
3
Is this question on topic?