The theme for the December photo competition is "Borders". This covers any photo that shows a demarcation between any two borders, political or physical. The border may be anything, such as a country, state, or city border, a border between two different properties, or a border between two physical biomes, and the thing demarcating it can be as simple as a sign or as complex as a full checkpoint.

You may make your submission as an answer to this post. The following rules apply:

Apologies for the extra time it took for judging - I was a bit distracted lately.

gmauch wins the bragging rights for the highest-voted photo this month, of a new bridge under construction between Brazil and Paraguay.

Kuba wins the virtual prize, for their photo of the snowy border between Bolivia and Chile. 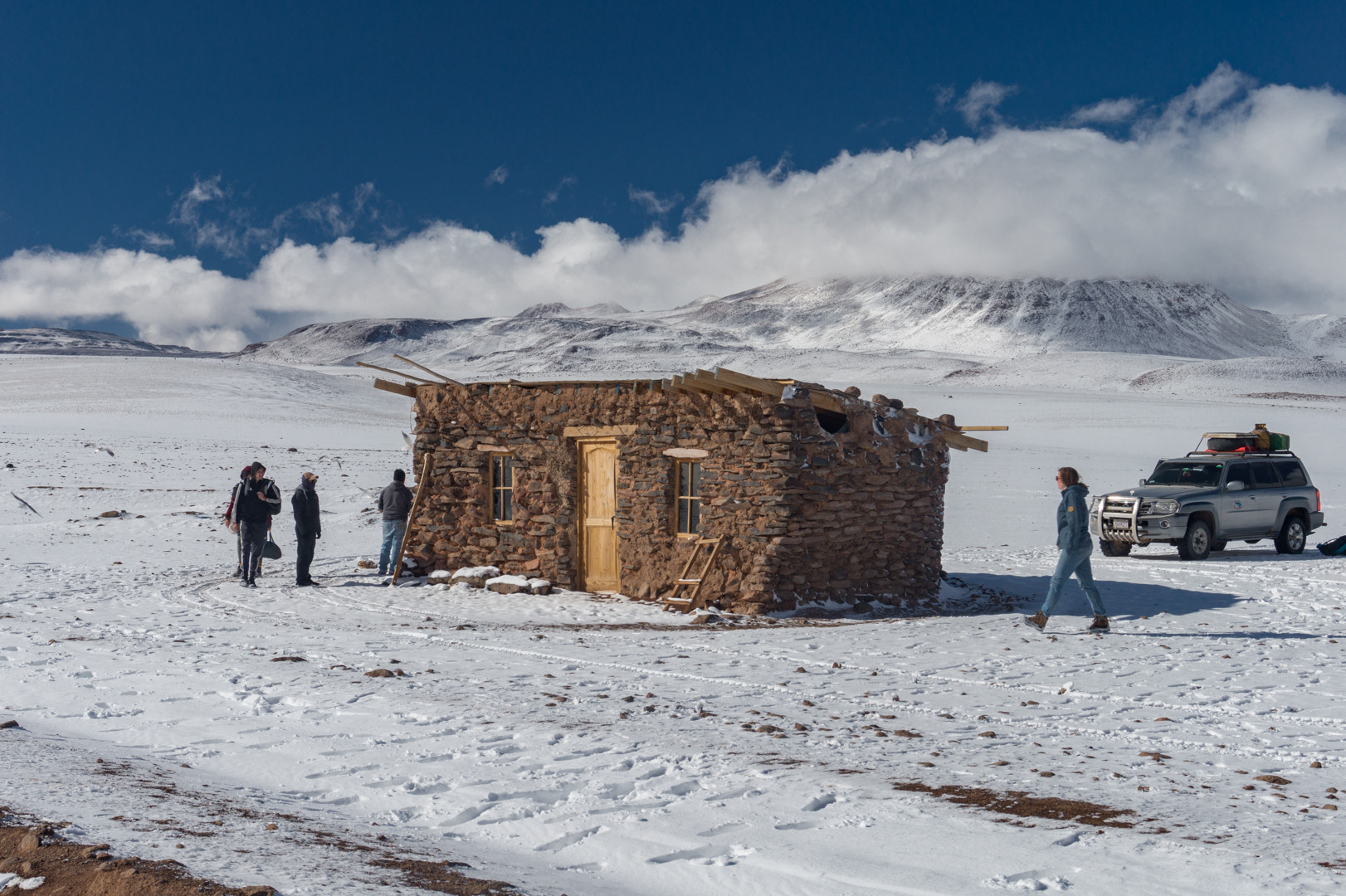 I can only remember the piercing cold, spending all morning waiting for the bus, and then suffering in 30 C heat after a short bus ride to San Pedro de Atacama

This photo show the new bridge (yet unfinished!) between Brazil and Paraguay, a bit south form the current existing Friendship Bridge (Brazil–Paraguay).

The photo was taken in May 2022, in the city of Foz do Iguaçu when riding a giant Ferris Wheel very close to the tripod point between Brazil, Argentina and Paraguay. In fact, we might even be able to see the Argentina as well on the photo (to the left of the picture, can't tell for sure).

IMHO this photo specially fits this month's contest since it shows the Paraná River (natural border between Brazil and Paraguay and also Argentina and Paraguay) as well as the bridge under construction (man-being-made border). 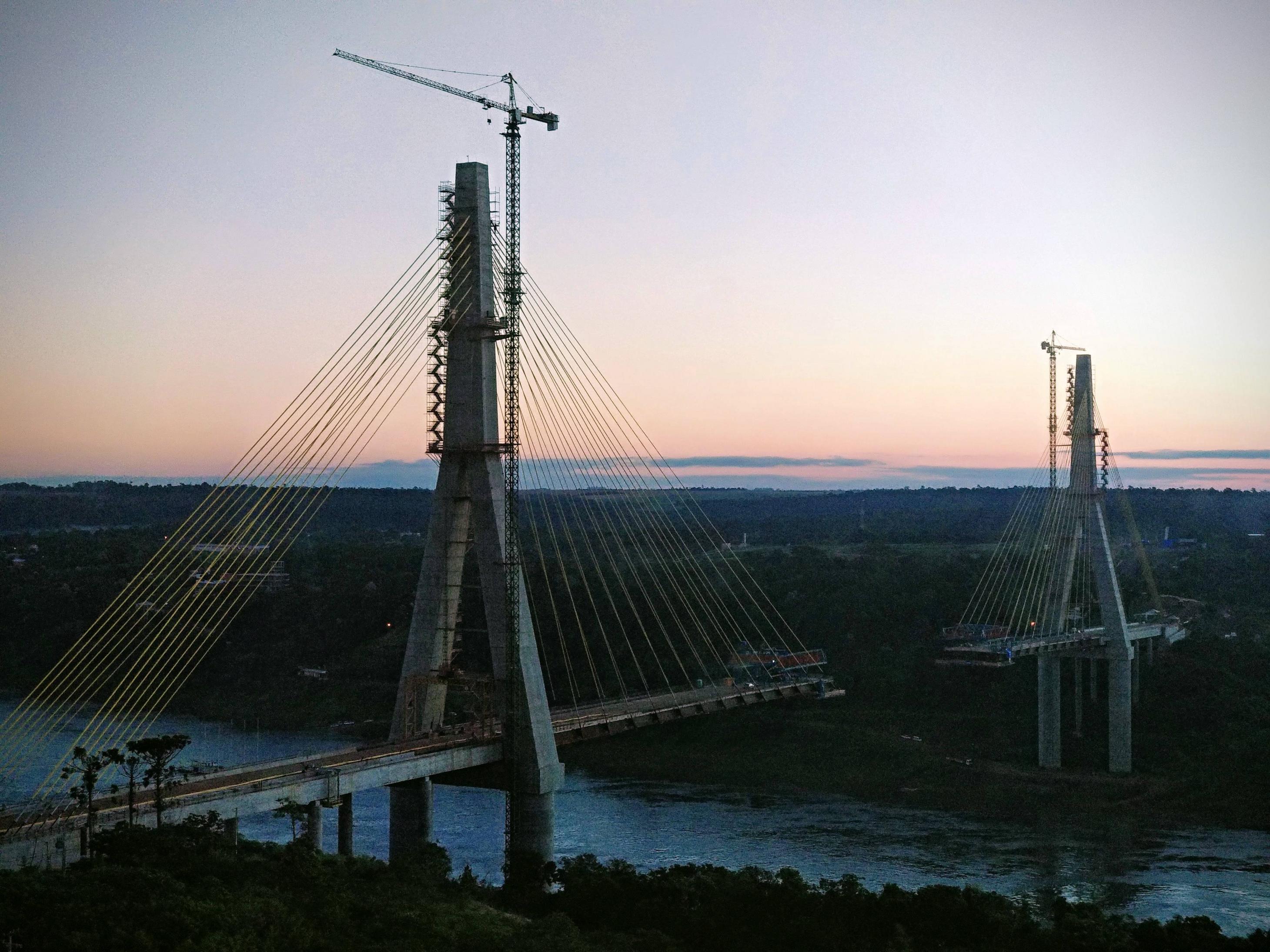 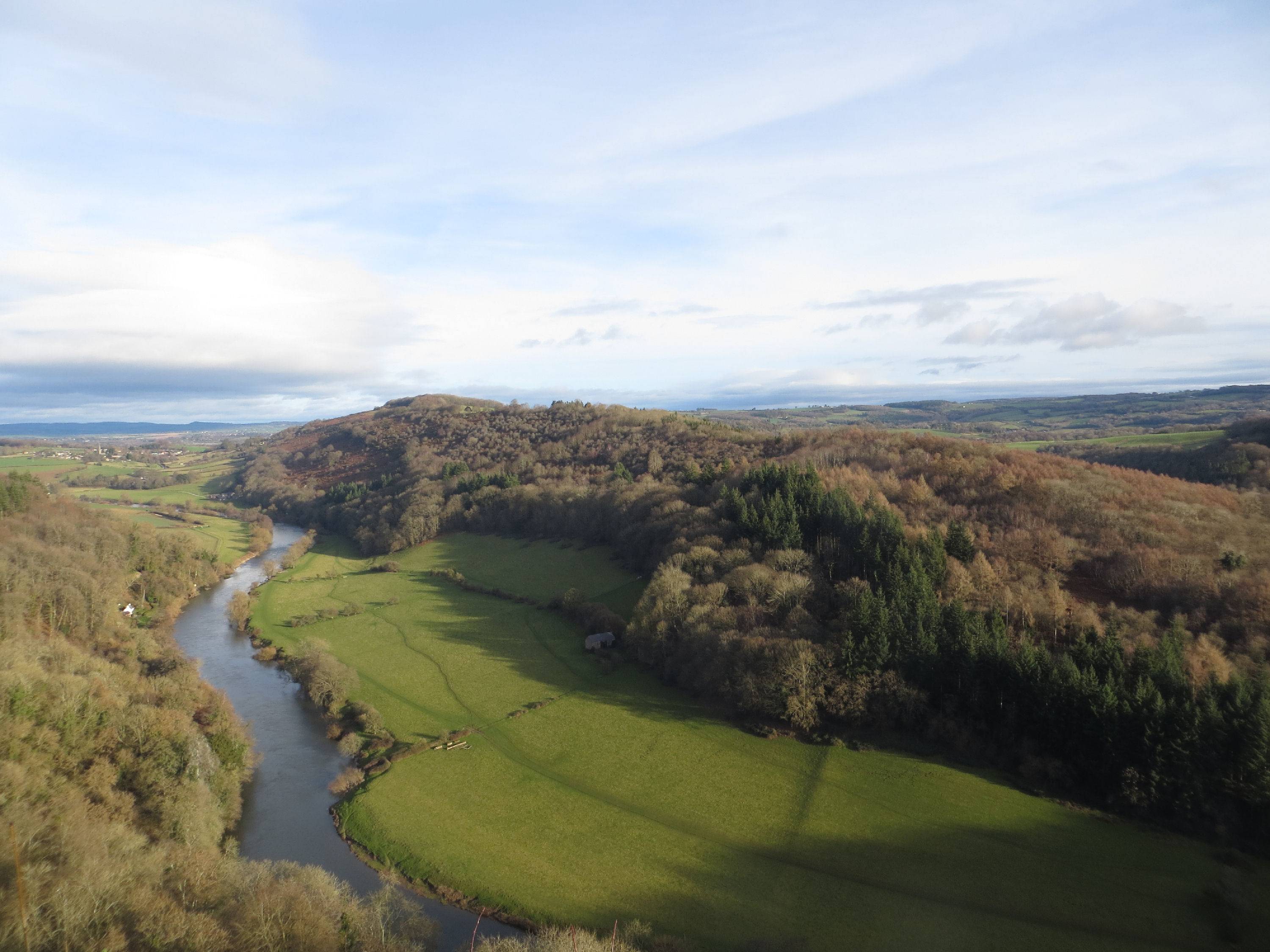 This photo is taken from a viewpoint on Symonds Yat trail, I even think it was Symonds Yat Rock but I am not completely sure of that detail.
The river Wye is the border between England and Wales there and I am on the English side, the meadow and hill central in the photo are in Wales.

This is part of the mid-Atlantic ridge that emerges from the ocean in Iceland. This is looking roughly south, so the Eurasian tectonic plate is on the left and the North American plate is on the right. This was also the site where the Icelandic parliament was held annually from 930 to 1798. It is now part of a national park. Photo taken March 2009. 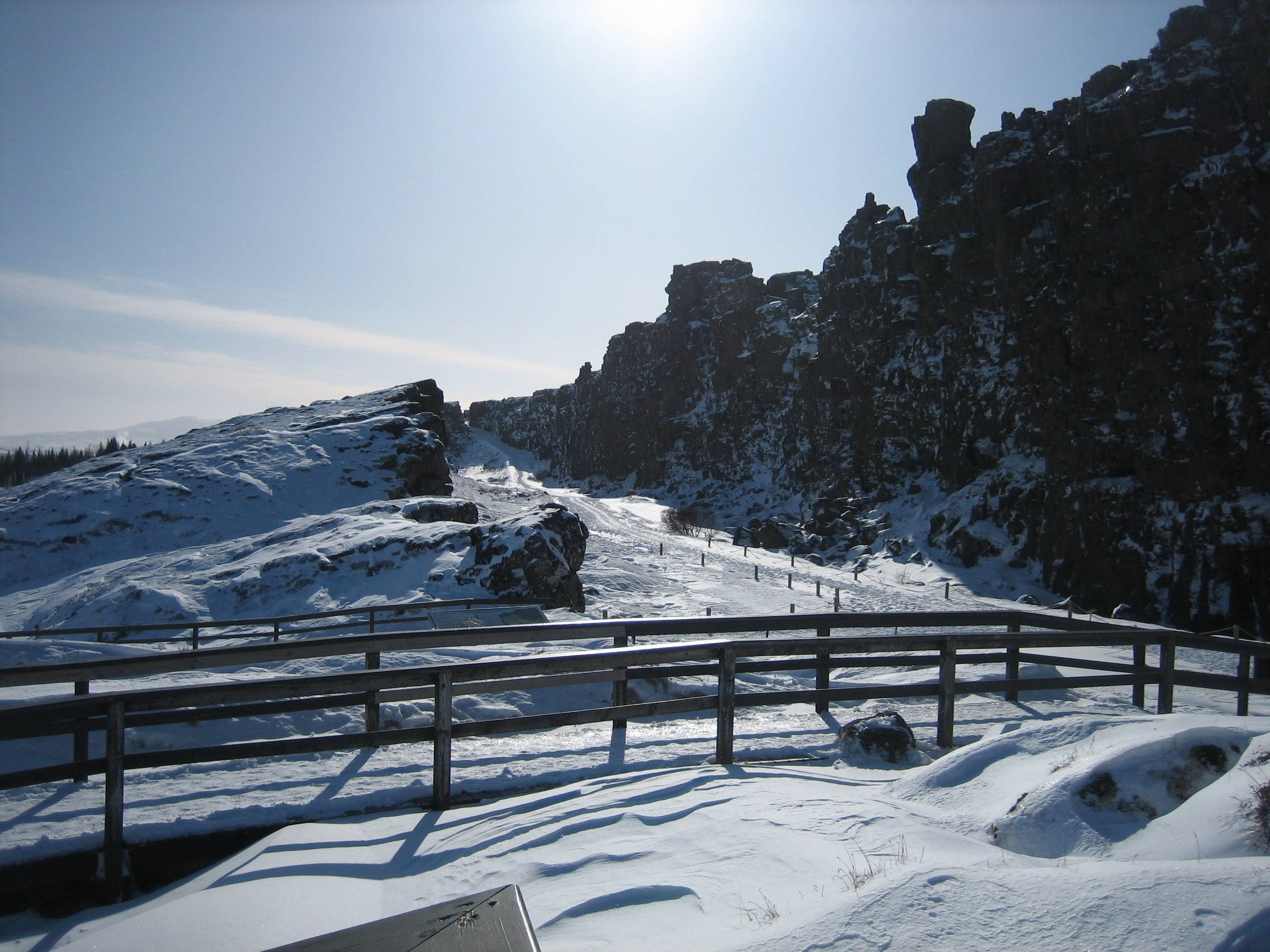 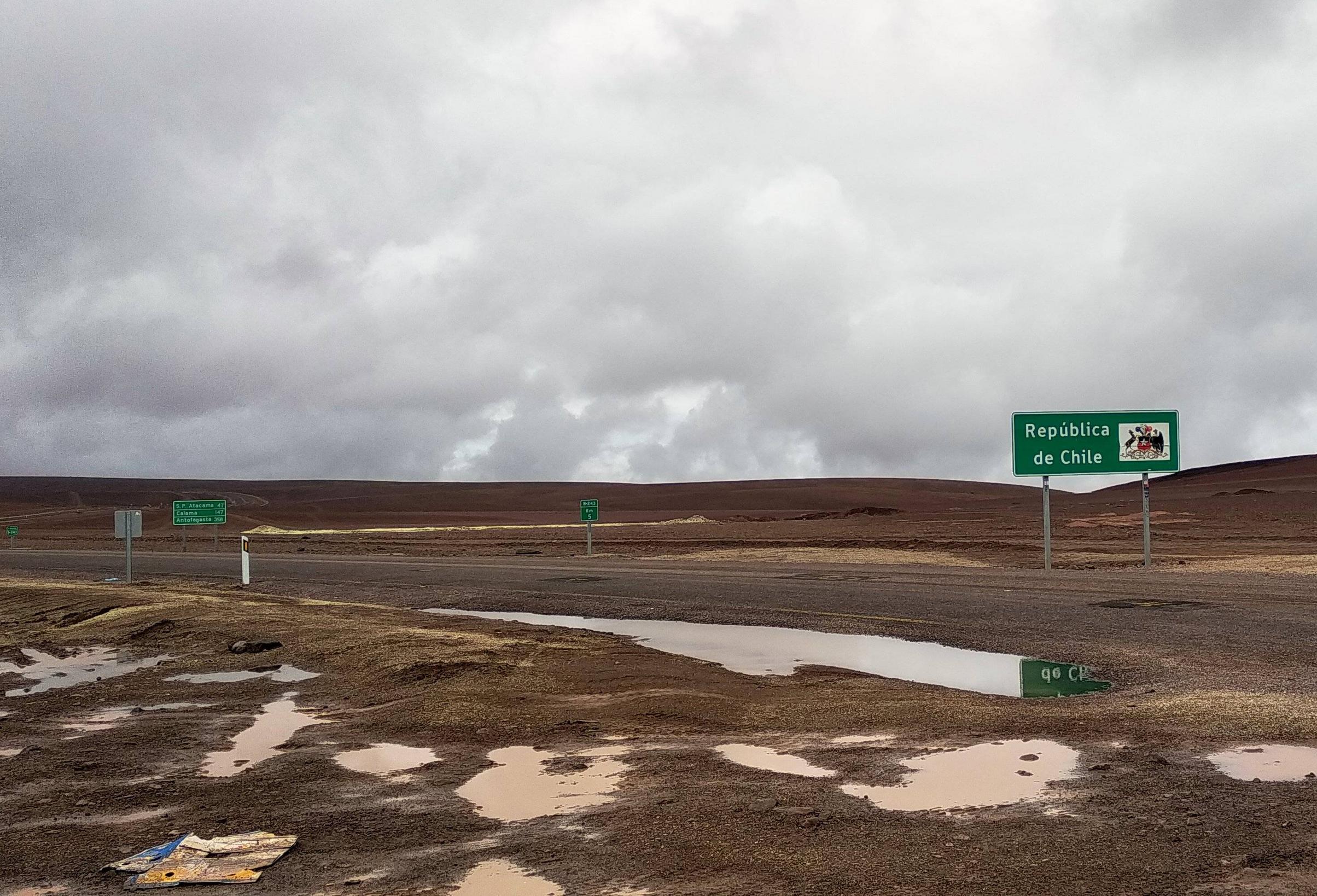 Traveling from Bolivia to Chile at Hito Cajón in the Atacama desert, the paved road begins at the Chilean border, although the (extremely thorough!) Chilean checkpoint itself is a few kilometers further along. 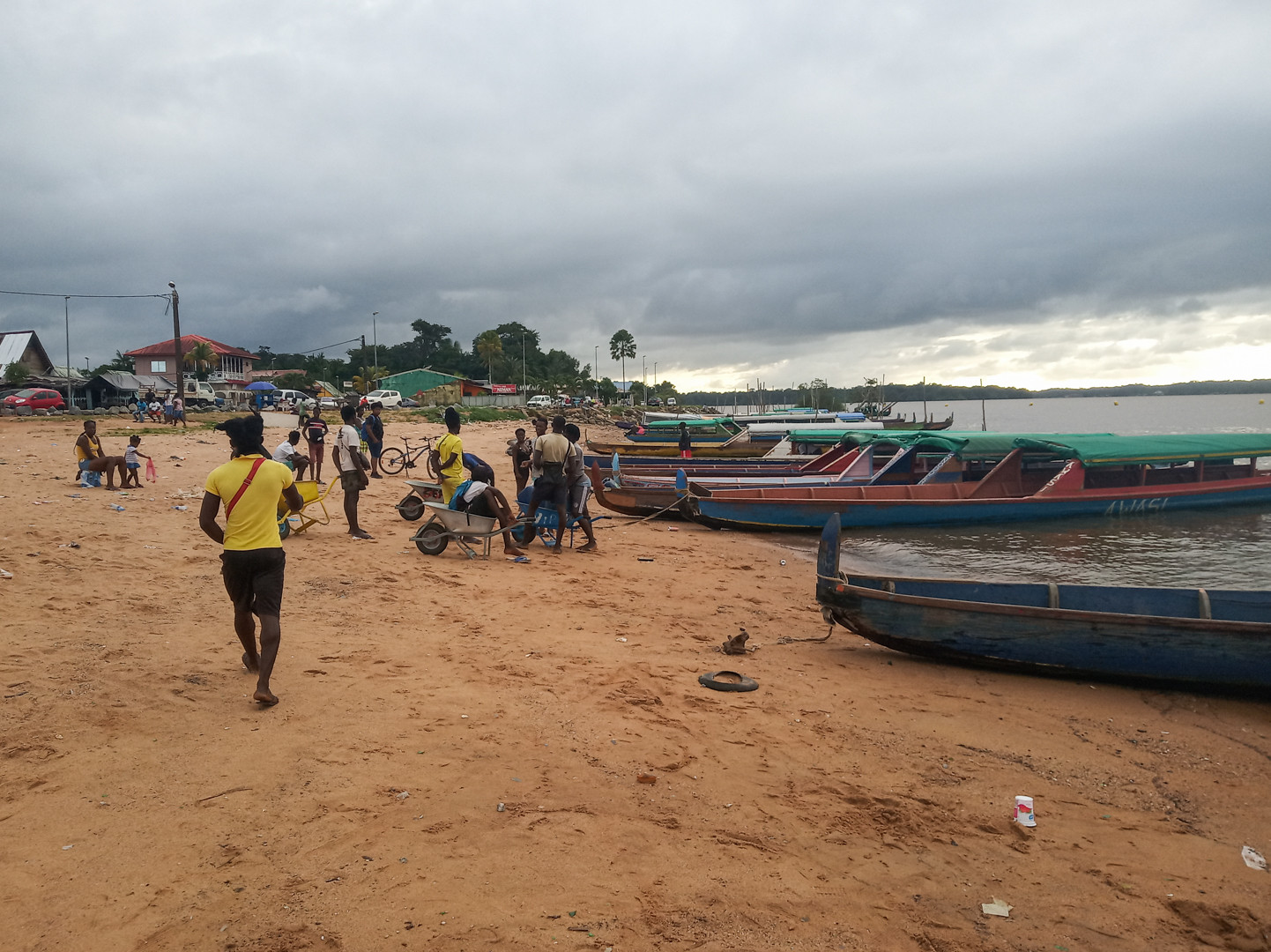 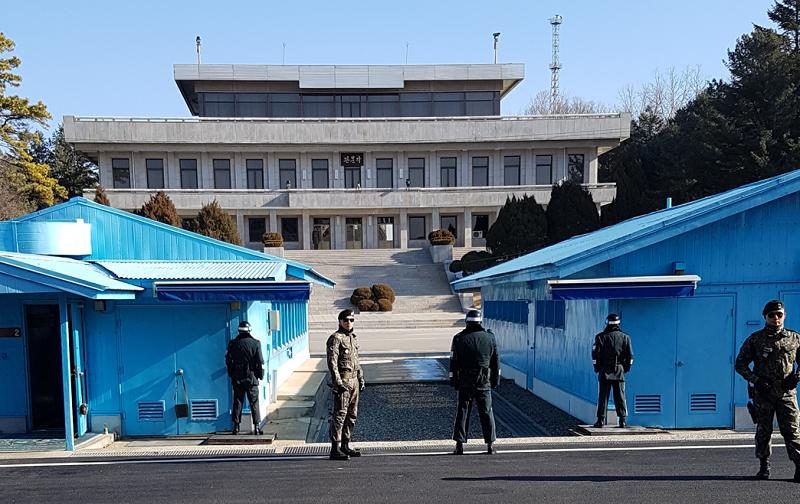 Looking into North Korea from the South Korean side of the Joint Security Area. Photo taken in 2017.

Kitchener and Waterloo: Part 1 of 3.

Kitchener and Waterloo, located in southern Ontario in Canada, are two adjacent cities that collided well over a century ago. The boundary between them is irregular, often running through houses and other buildings, including the head office of Sun Life Financial (formerly Mutual Life), where people have to ensure they are in rooms on the appropriate side of the border when signing "dated at …" documents.

The boundary itself is found only on maps, along a short recently built section of University Avenue (see photo in part 2), and at this new shopping mall: 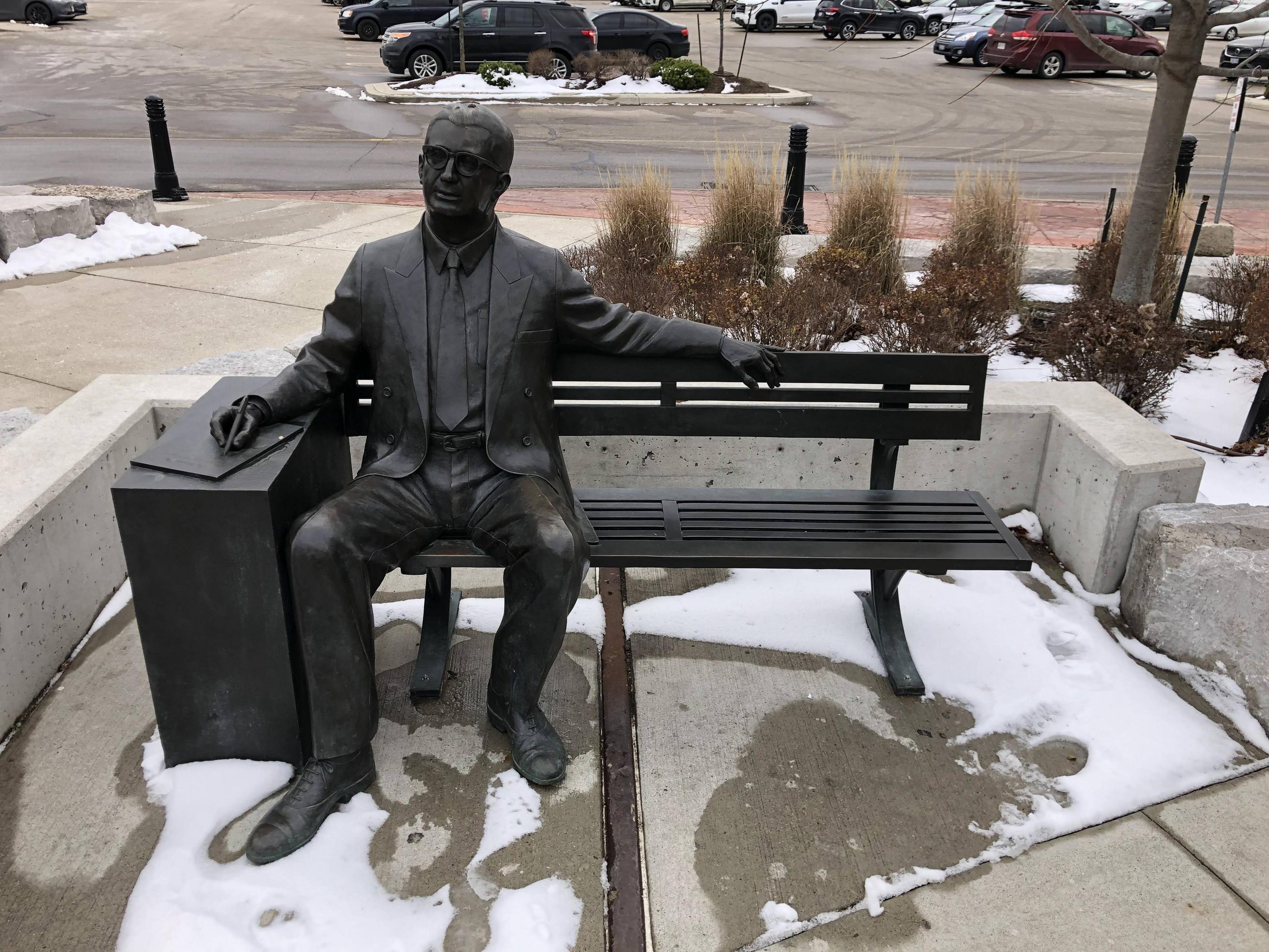 A plaque accompanying the statue reads:

When the current Mayor of Waterloo opens her front door, the only buildings she can see are in Kitchener. 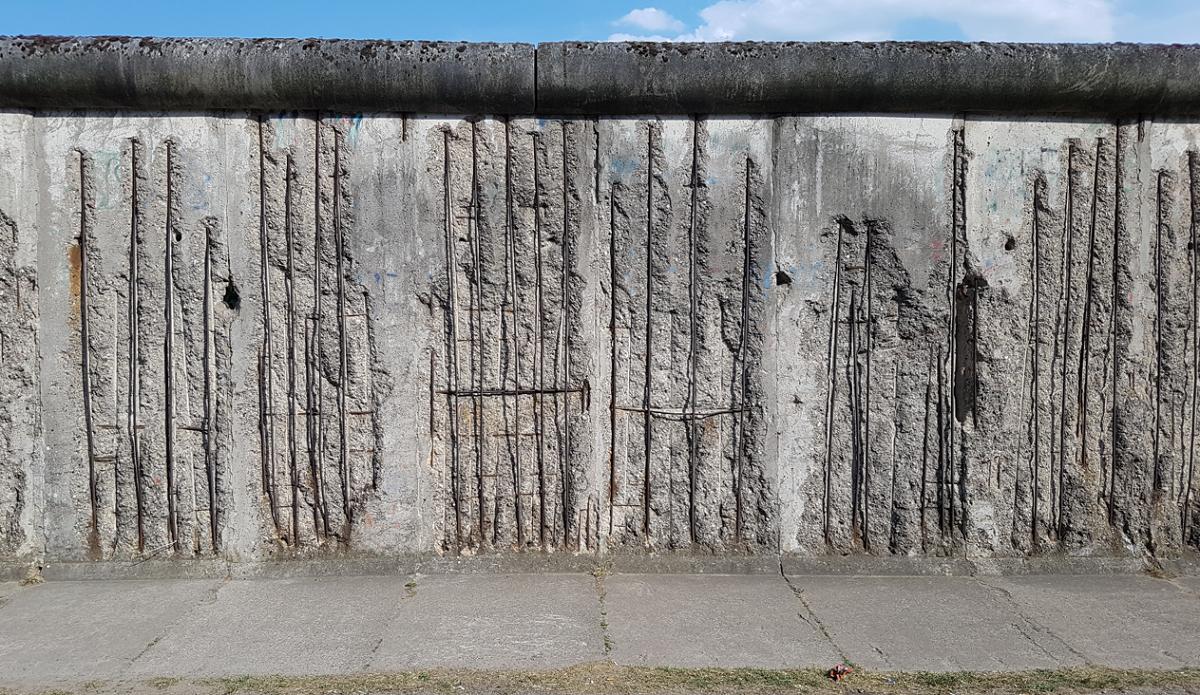 Decaying remains of the Berlin wall. Photographed from the East Berlin side in 2018.

Here I was walking on the street named Triq L-Imġarr in Gozo, Malta, in October 2021.

When you cross from the city council of Victoria or Rabat to the one of Xewkija or viceversa, you can see border signs of two different ages: a contemporary one welcomes to Xewkija while the initials of Victoria/Rabat are carved in the limestone column in a much more old-fashioned (and local) style.

The word Merħba means "Welcome" and appears on all boards there. It reminds me of a gag I heard years ago when somebody told me: "Apparently, all the highways of Germany lead to Ausgang"... 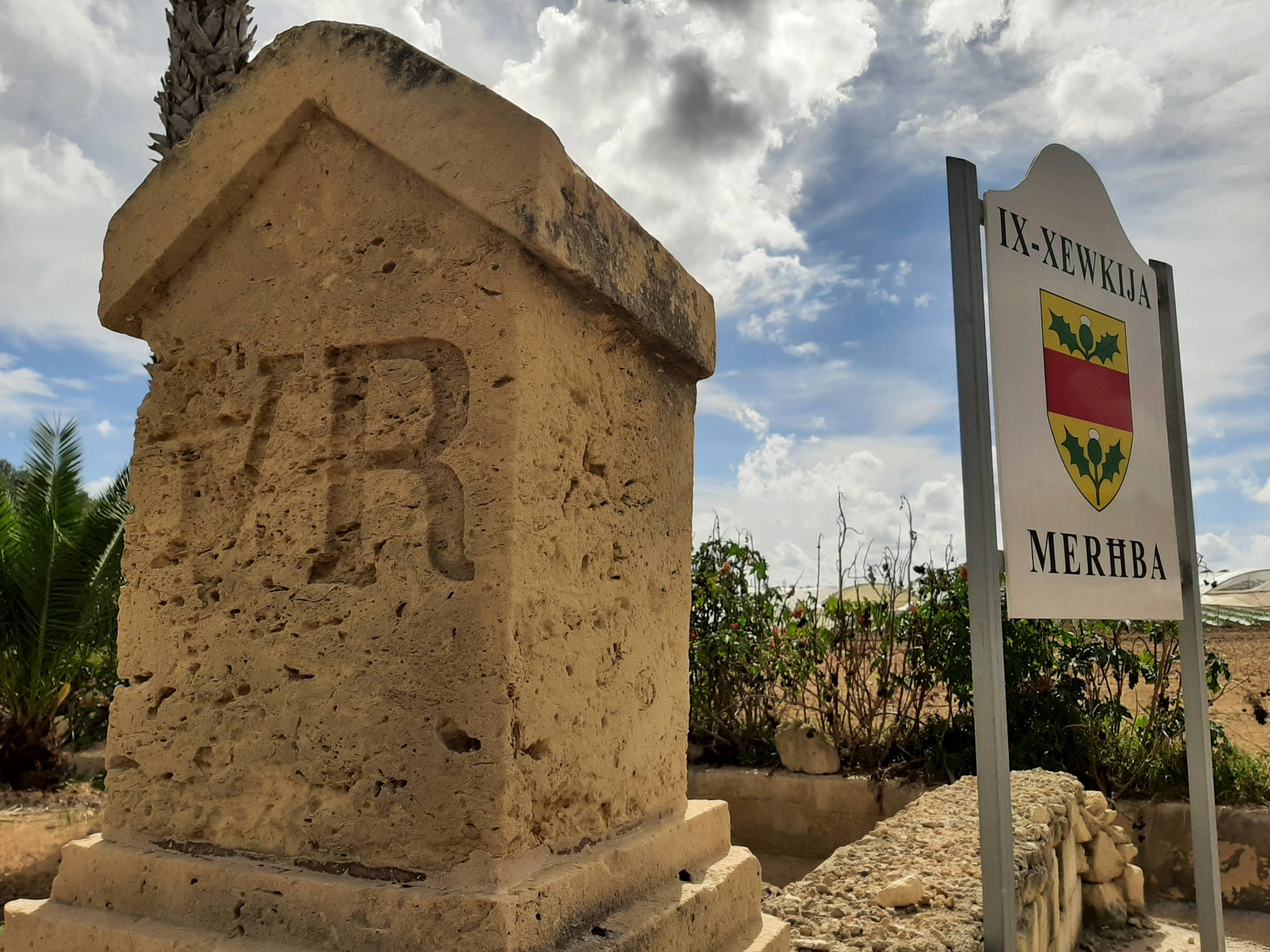 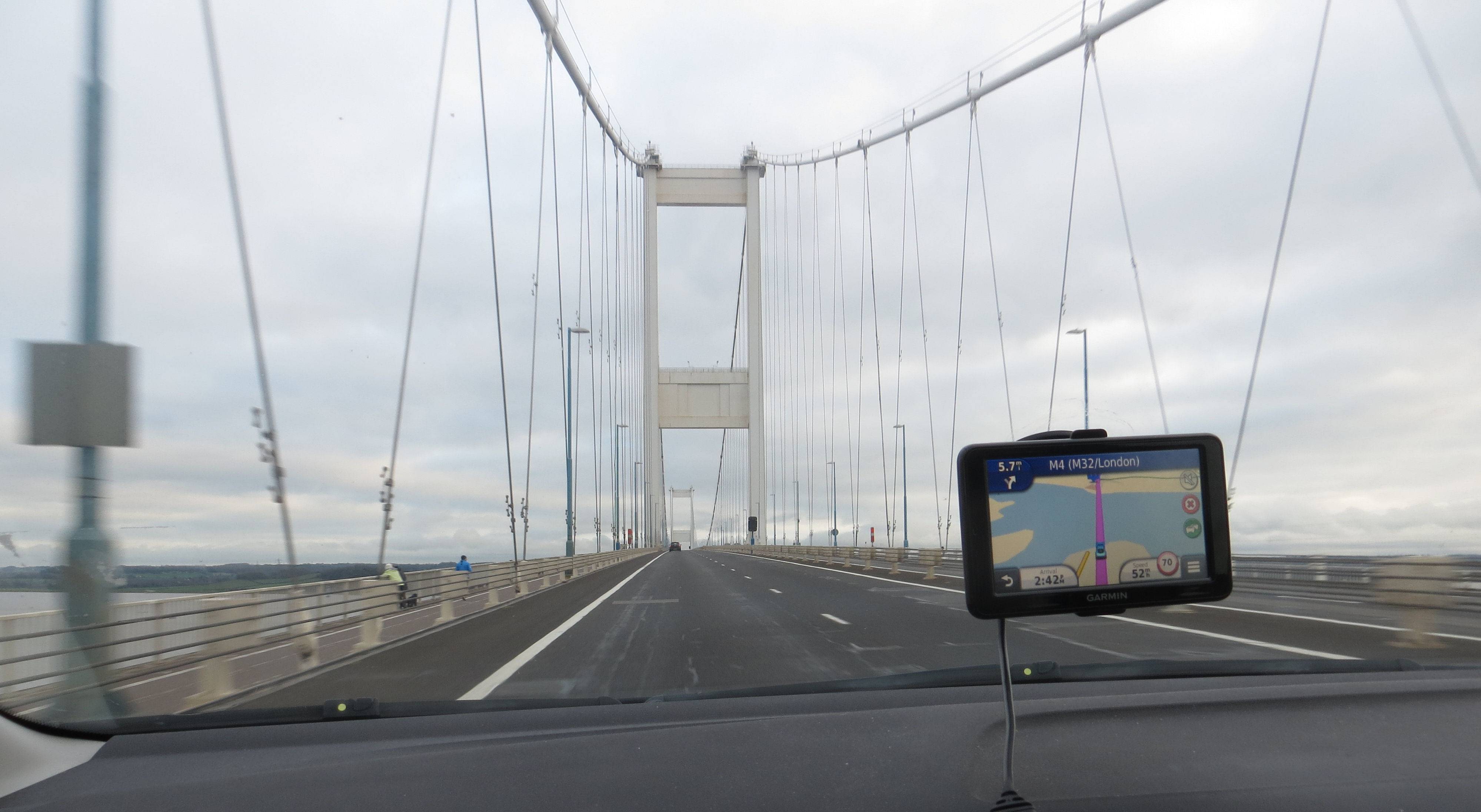 Traveling from Wales to England, as far as I know the border is in the Severn here, so under the bridge we are on.
This is the old Severn bridge, not the new one a bit farther south. 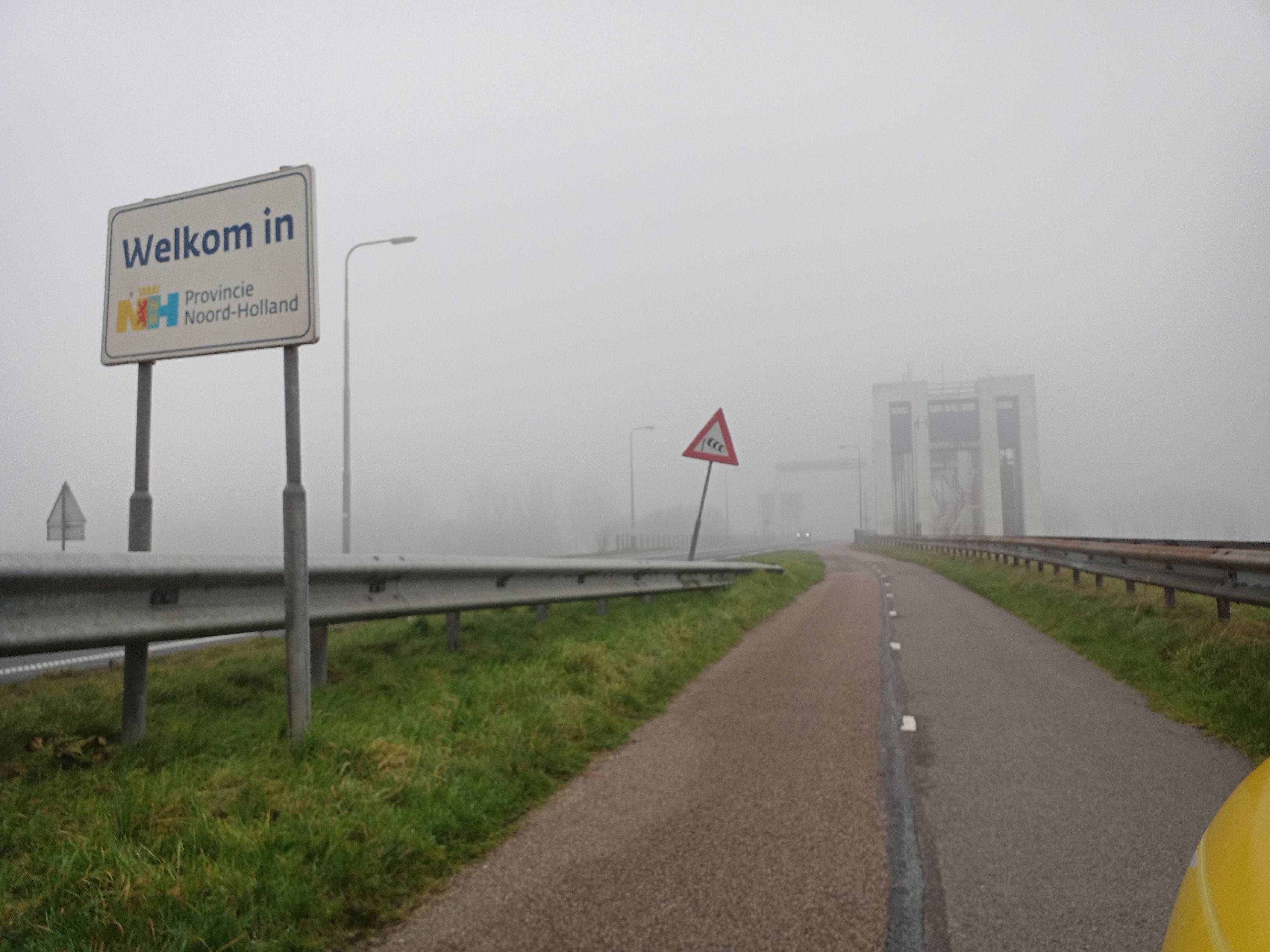 The sign for passing the province border, on the Houtribdijk, also known as the dike Enkhuizen-Lelystad. This is almost in Enkhuizen, after about 25 km of dike.

The mist was quite thick most of the day, this is the furthest I have seen on that dike. As explained in this Wikipedia page, while it was build as a dike and is called that, in effect it works as a dam.

A world unexperienced by anyone viewing this post.
Ranjeet Ghandi Road, Pune - and a home.

Taken from a moving taxi, in western tourist comfort.
The border lies somewhere between the end of my lens and the dining room that I look in on.

Heavy tarpaulin. Has seen better days:
Now a more waterproof roof than many nearby home for four.
Or more.
The next home along the road used a carpet :-( .

Frilly white and pink outfits - designed without doubt with other circumstances in mind: Cleaner and todier than they would be if I wore similar for an hour in such circumstances.

A dollar a day (or 50 Rupees) would probably cover costs. They may be fortunate enough to have more. Less than my taxi fare. 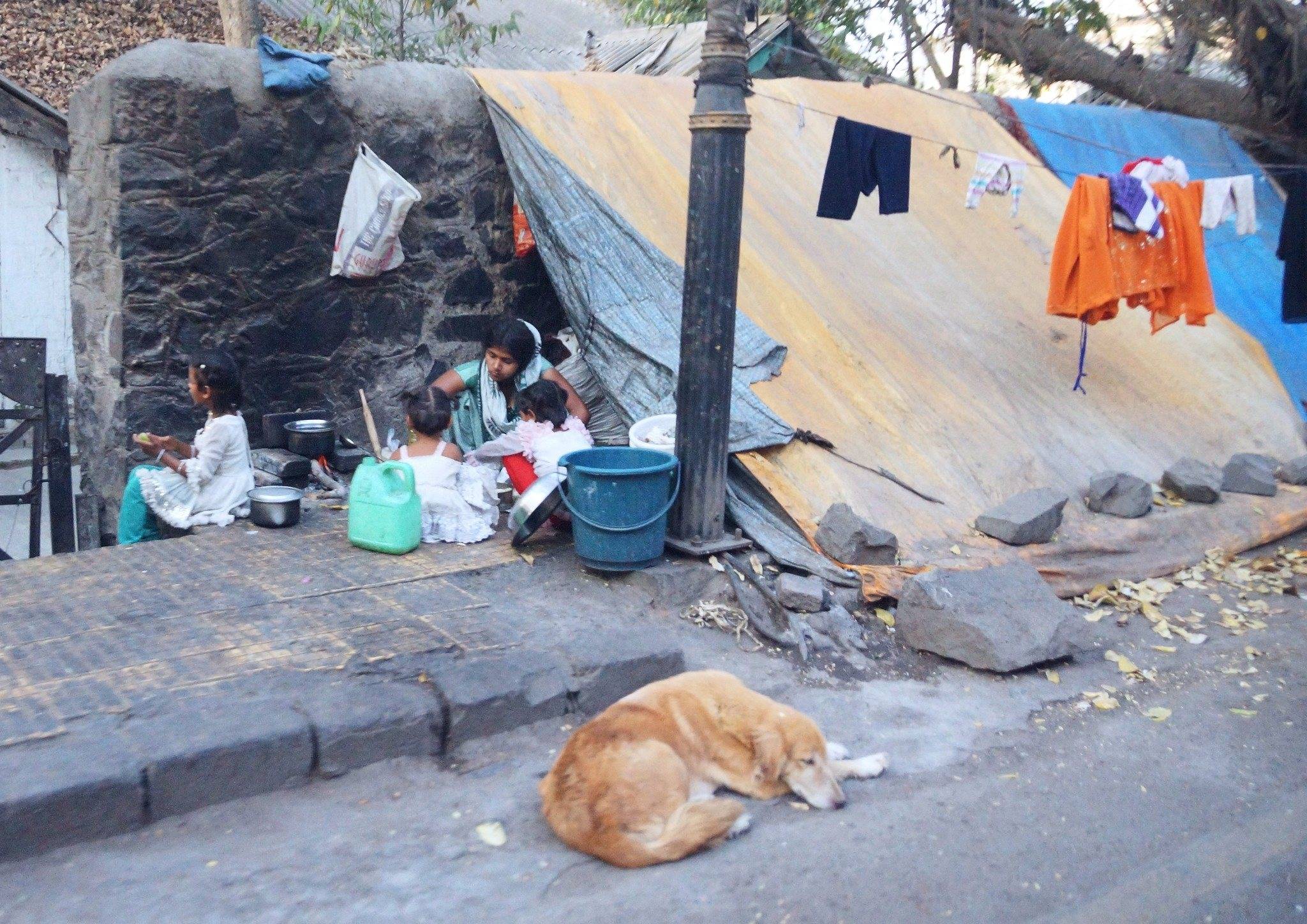 Kitchener and Waterloo: Part 3 of 3.

You might have noticed that the compass directions given in the first two parts looked wrong, but they aren't.

Neither city has streets that are in a grid system, much less lined up with the compass, and the two cities' official choices of direction ended up being 90° apart. To make it more confusing, there are some streets, such as King and Weber that run the length of both cities, labelled North and South in Waterloo and East and West in Kitchener, leading to the frequently asked question, "Do you mean King Street North, South, West, or East?". There's also the unrelated confusion of King and Weber intersecting 3 times (a few decades ago, it used to be 4).

And to make it even more confusing, some people ignore the official designations and rely on their own sense of direction. At the intersection of Victoria (N/S) and King (E/W) someone once asked me for help; the directions they had been given said to go to that intersection and then to go east on Victoria. Any local resident would have understood what that meant, but it doesn't make sense to any sane person.

Meanwhile, the train station is on Victoria North, and its tracks run E/W even though they are parallel to Victoria. In fact, heading out of town, there's a section where Victoria goes North, the train goes East, and the river flows South, with all three running parallel.

Even the ordinary streets that don't have direction designations can be confusing: 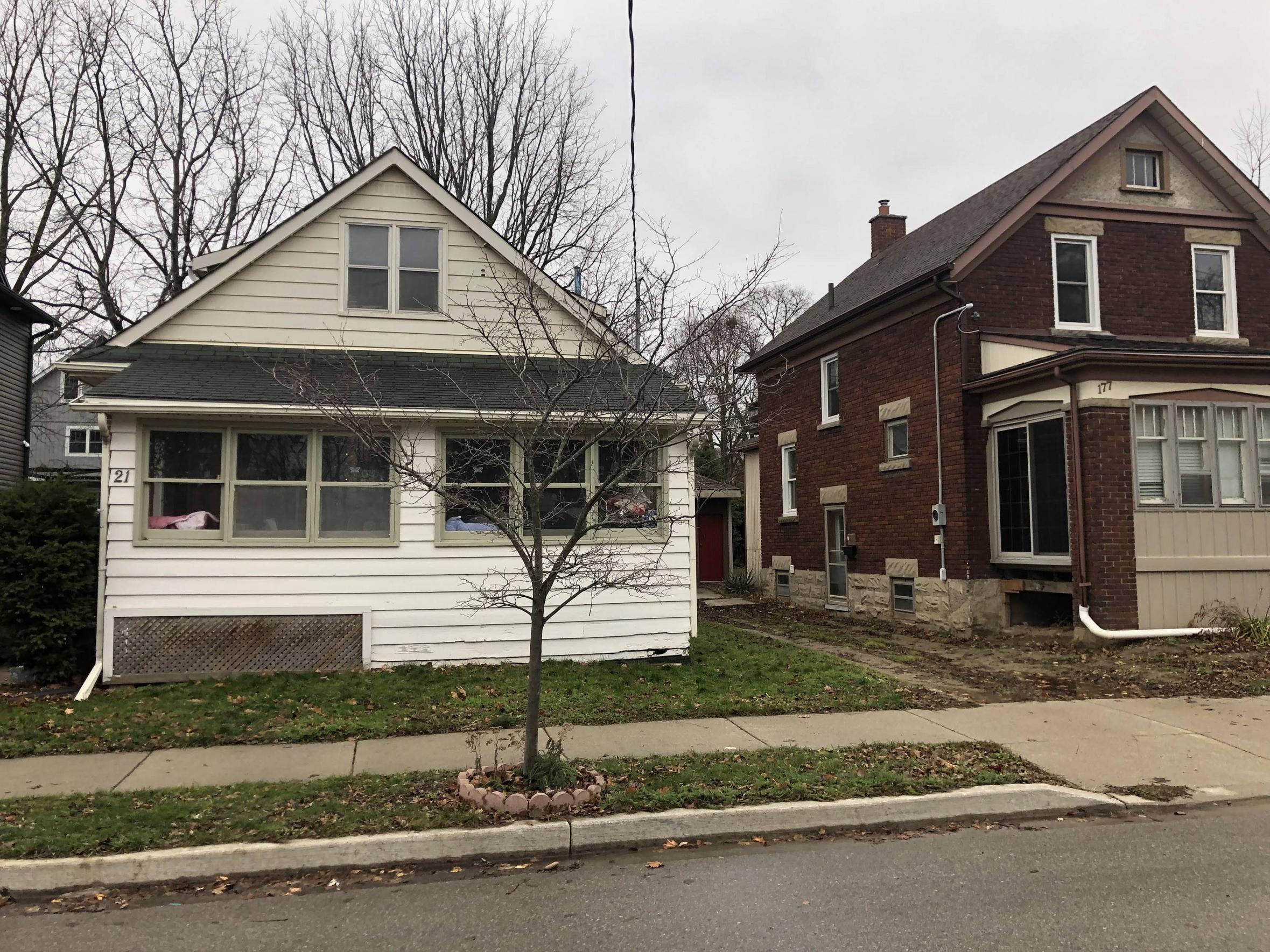 21 Esson Steet in Kitchener is located right beside 177 Esson Street, in Waterloo.

The city limit likely passes through one or both properties, not necessarily along the obvious line between the two houses.

Kitchener and Waterloo: Part 2 of 3.

Ira Needles (see the statue photo in part 1) is facing toward the end of University Avenue, which has the unusual feature of having high-voltage distribution lines running along both sides of it. 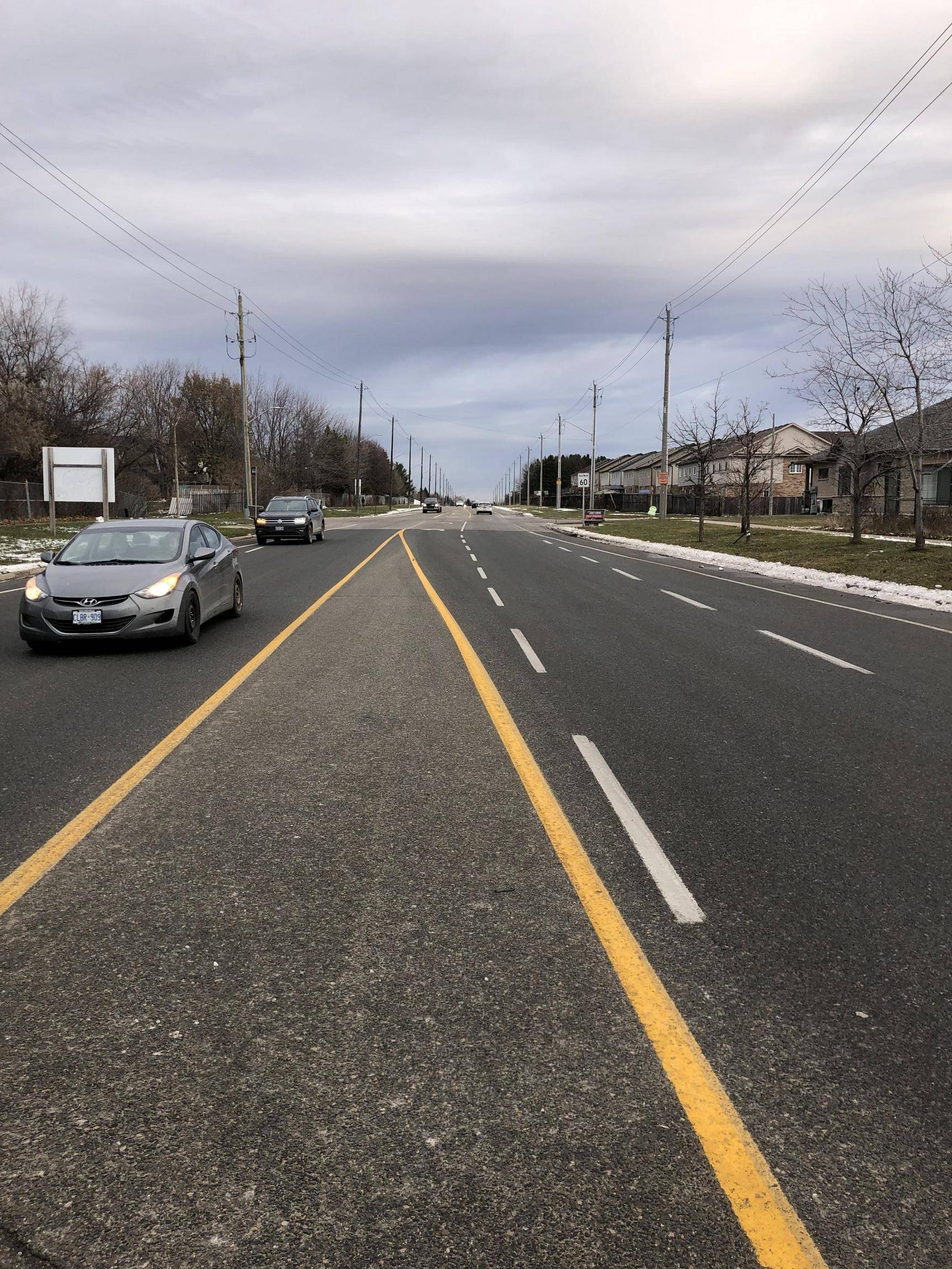 This part of University Avenue happens to form the boundary between the conjoined cities of Kitchener and Waterloo. On the left, the lines run along the south edge of Waterloo, and are owned by Waterloo-North Hydro. On the right, the lines run along the west edge of Kitchener, and are owned by Kitchener-Wilmot Hydro (which is confusingly called "KW Hydro", when "KW" normally refers to Kitchener and Waterloo).

This street is maintained by the Region (county) of Waterloo, which shouldn't be, but often is, confused with the City of Waterloo. A one block section of nearby Silvercrest Drive is similarly divided along its center, but it is maintained by the two cities. Its status becomes apparent only in winter, when the snow plows clear their own side of the road, turn around and return, lifting their blades to avoid inappropriately clearing the other lane.

this sunset on a Canadian beach, on the southern shore of Vancouver Island, in British Columbia, on the Pacific ocean, is separated from the United States of America by the Strait of Juan de Fuca, both a border as a hard-to-cross body of water and a political border. And farther ahead from land, it's also a different tectonic plate. 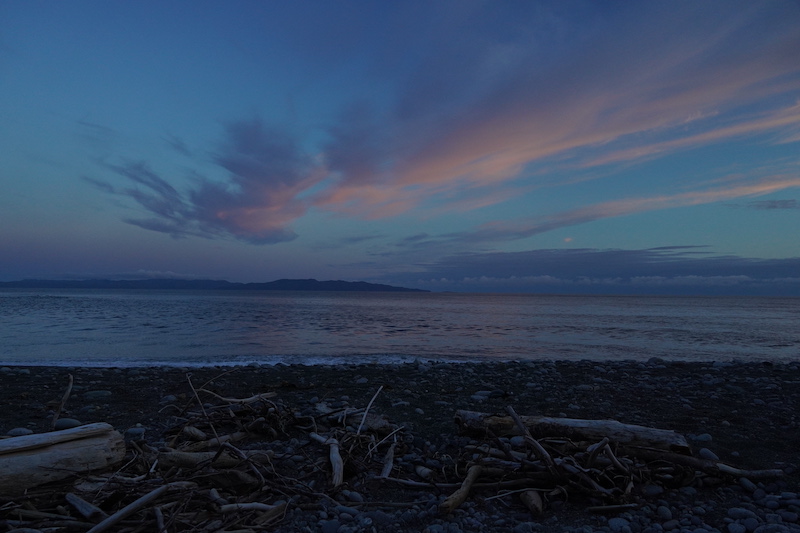