The theme for the December photo competition is "Retired means of travel". This covers any object that was once used by people for traveling, but is no longer in commission today (e.g. a retired passenger ship, car, bus, or plane, or a demolished airport/train station/bus station). (If anyone has any better ideas on how to word the title of the competition, please comment.)

Zach Lipton wins the bragging rights for the most voted photo, featuring three "retired means of travel": a Space Shuttle on top of a Shuttle Carrier Aircraft, flying over Hangar One, an abandoned hangar for airships.

PeterM wins the virtual prize for their photo of an abandoned van with graffiti appearing to "integrate" with its surroundings. 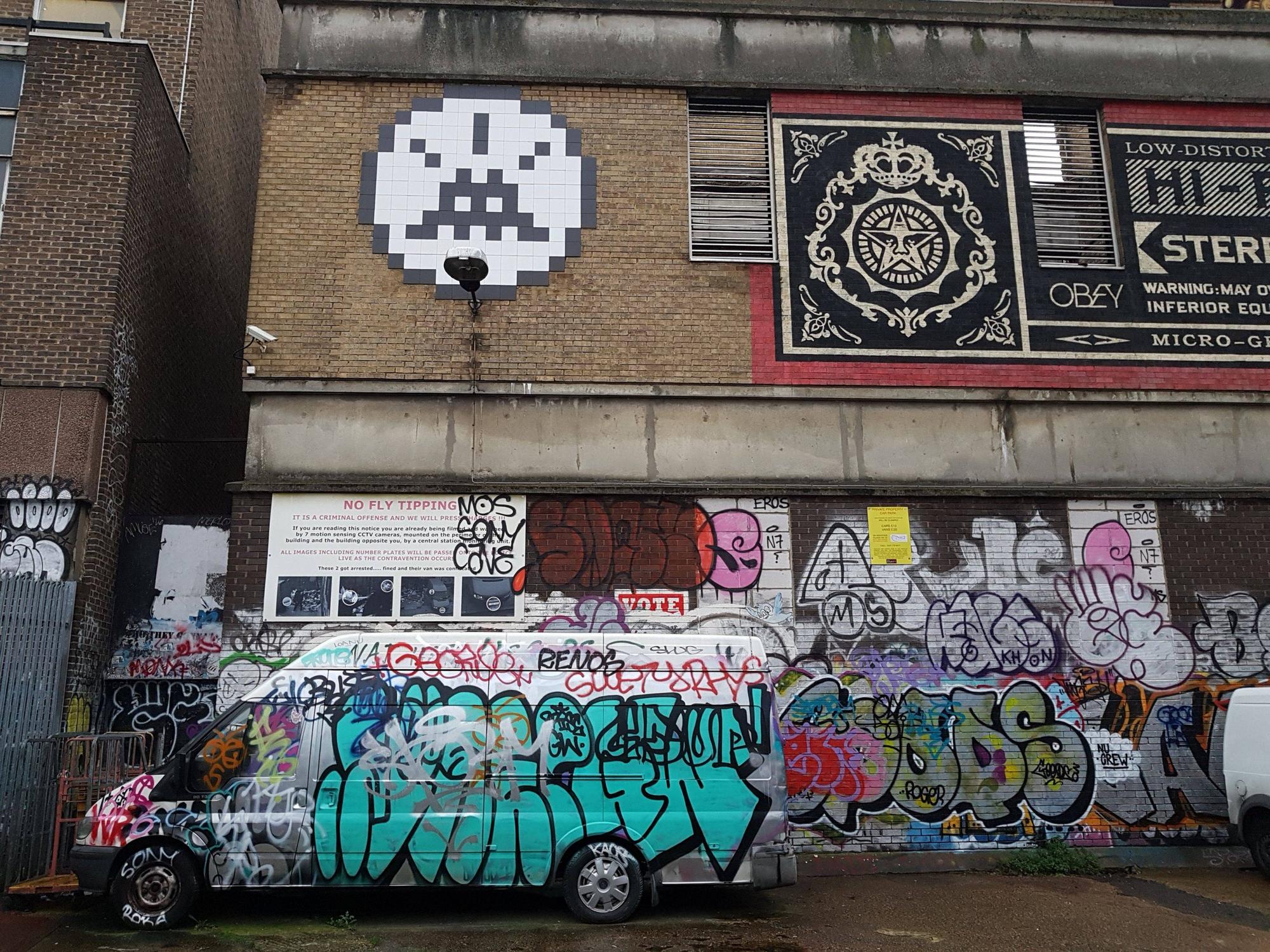 took this photo of an abandoned van near The Truman Brewery Markets in London (31st Dec 2019) - I wonder if it's still there...

edit: it's London, UK, as mentioned in the comments

Three retired means of travel in one here. 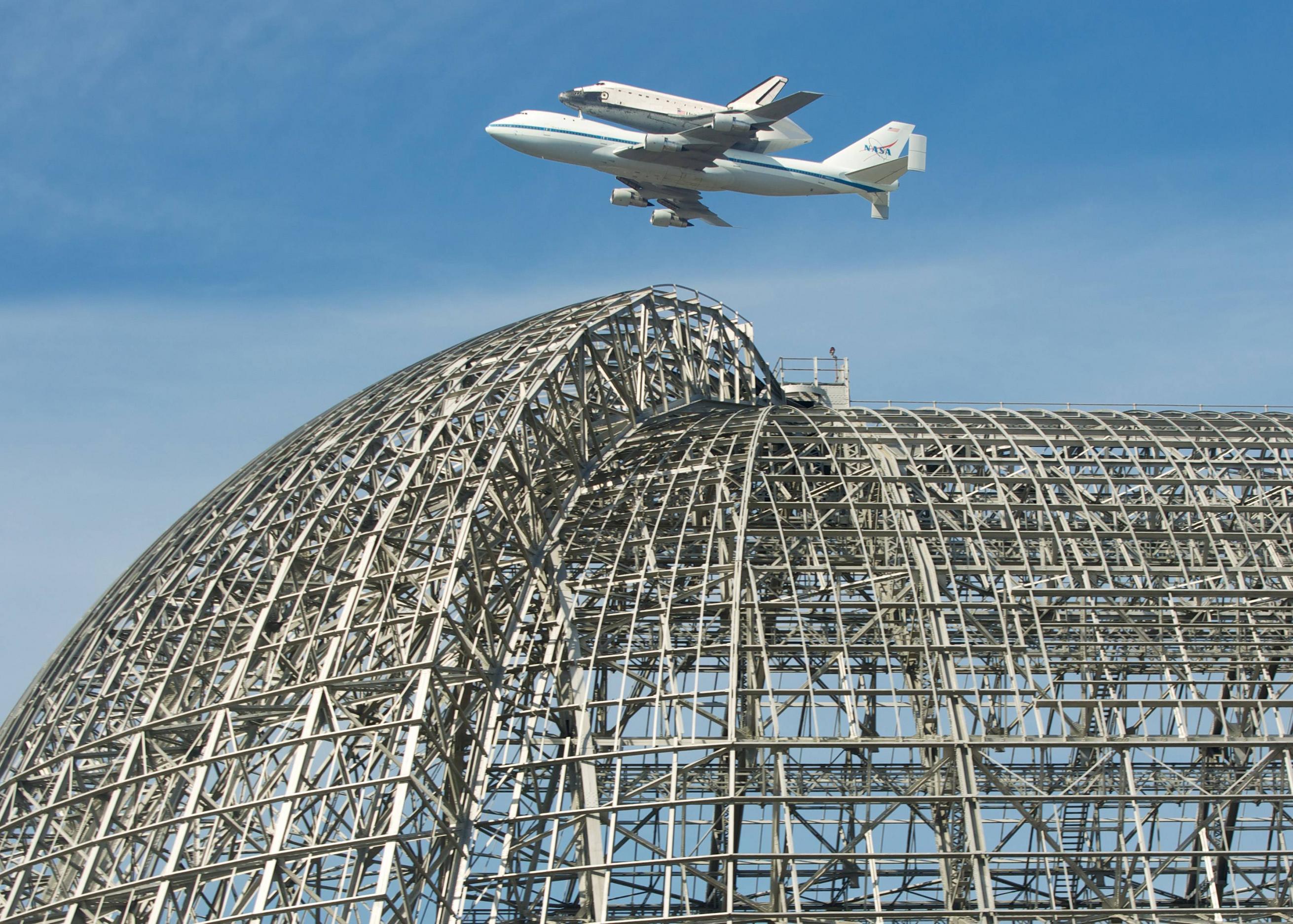 Space Shuttle Endeavour atop the Shuttle Carrier Aircraft does a flyby over the skeletal remains of Hanger One (built in the 1930s to hold rigid airships).

One of my favourite aircraft - the SR-71 Blackbird at Duxford, Cambridge we took on a visit in 2006 with our 3-month-old daughter. It's one of those rare museums that lets you touch the exhibits, and the Blackbird feels very weird! 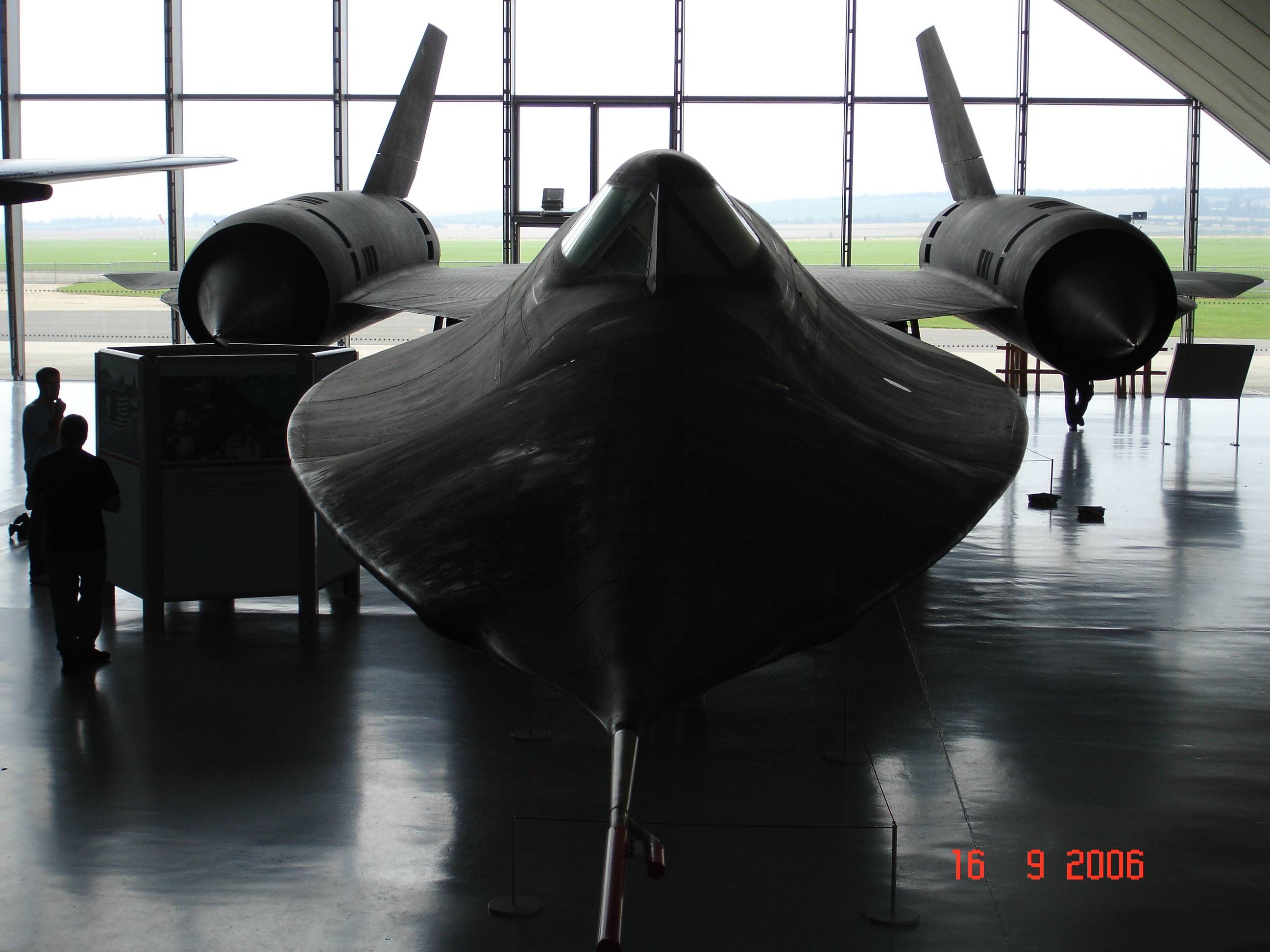 This is the official record holder as the fastest jet-powered, piloted aircraft of all time, with a top speed of 2200 mph (over Mach 3) at altitudes over 85,000 feet.

The Concorde at the Le Bourget museum in Paris, 2016: 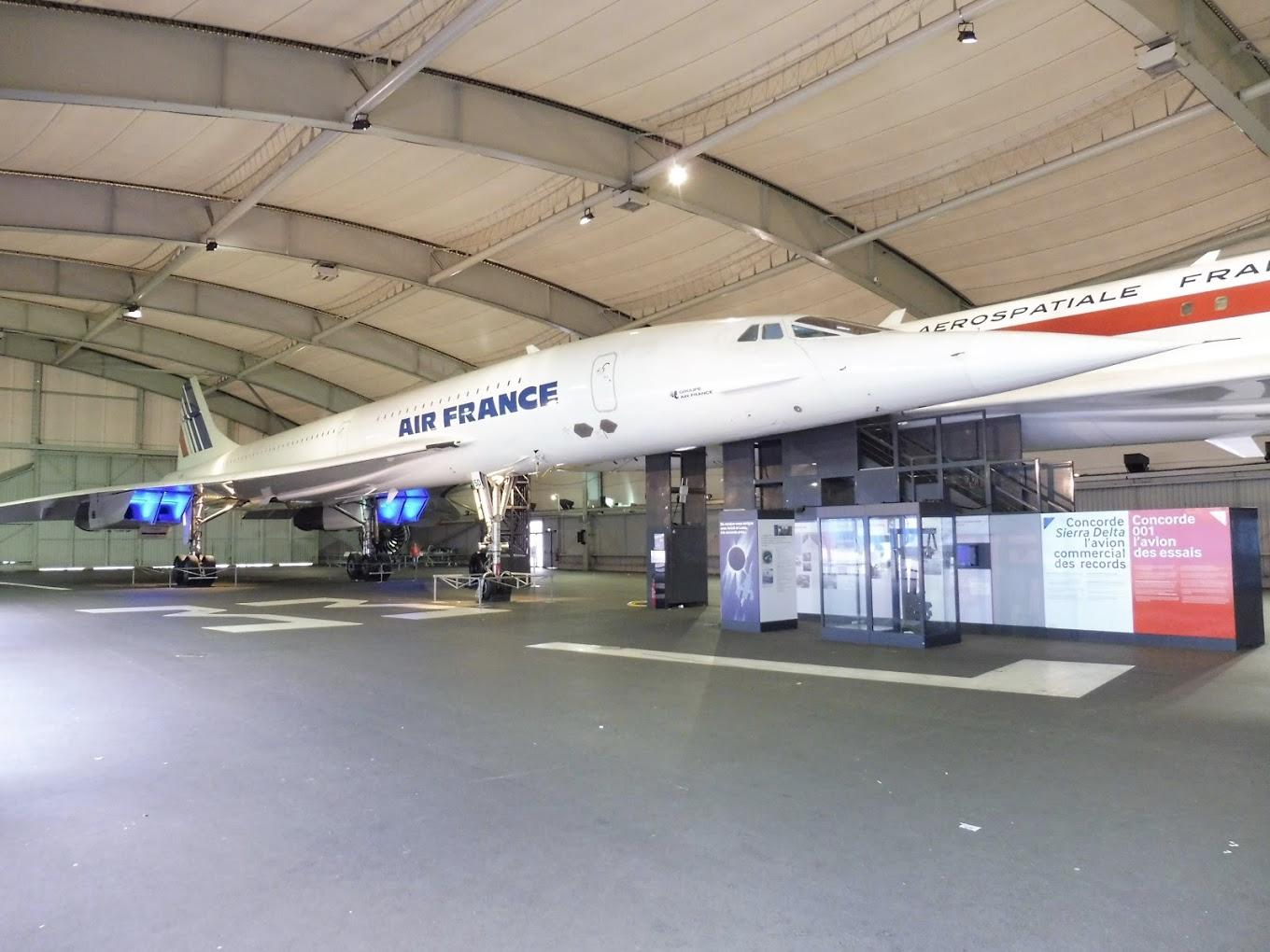 This is all that remains of an experimental high speed train which was under development in the United Kingdom during the 1960s. 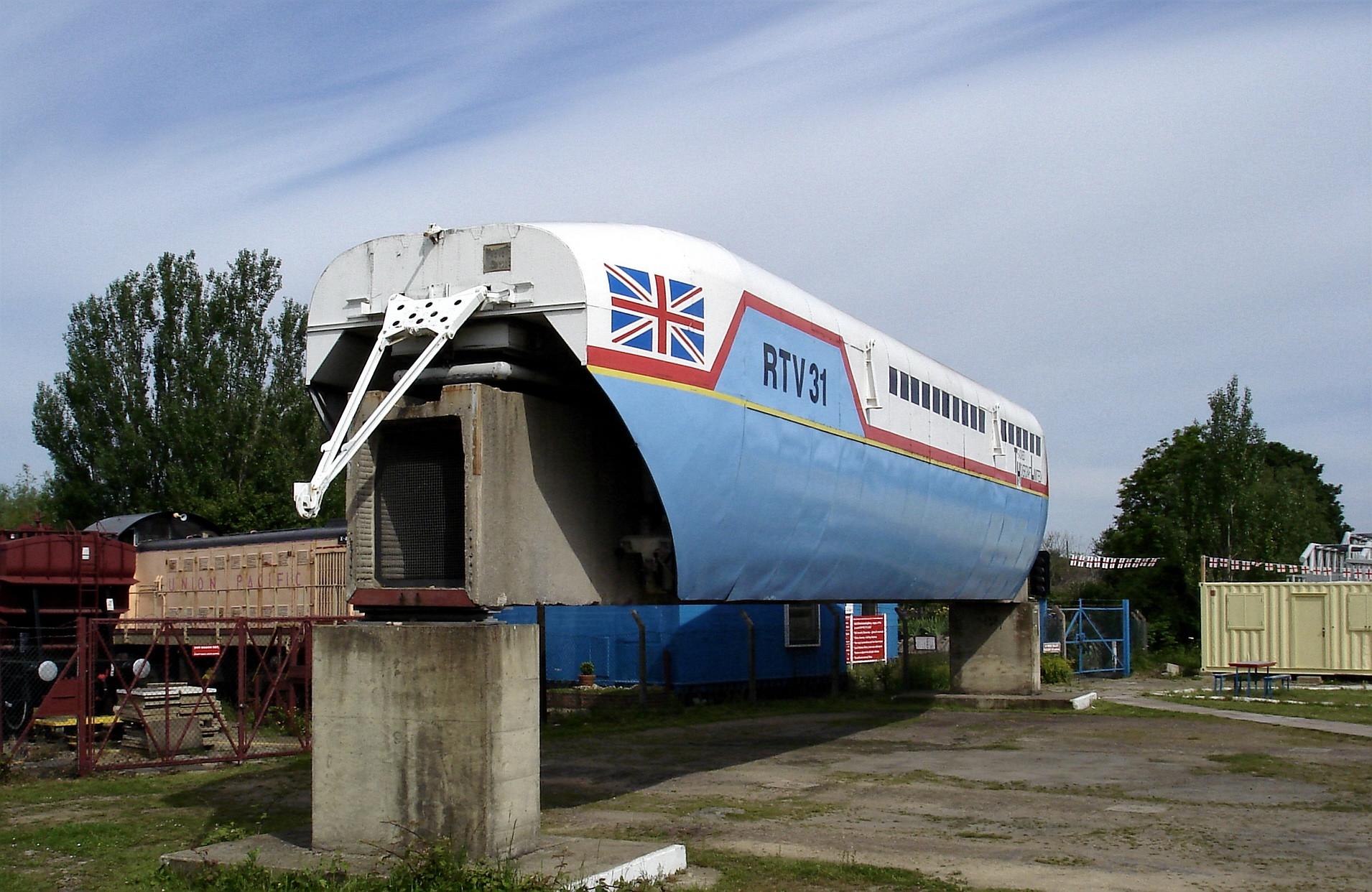 It combined two British inventions, the hovercraft and linear induction motor, in an effort to produce a train system that would provide a 250 mph (400 km/h) inter-city service. The project was cancelled, and never went into service.

An old bicycle transformed to a fully functioning human-powered blender. I saw it when using Couchsurfing in Curitiba and staying with a group of a very earth-friendly people :) 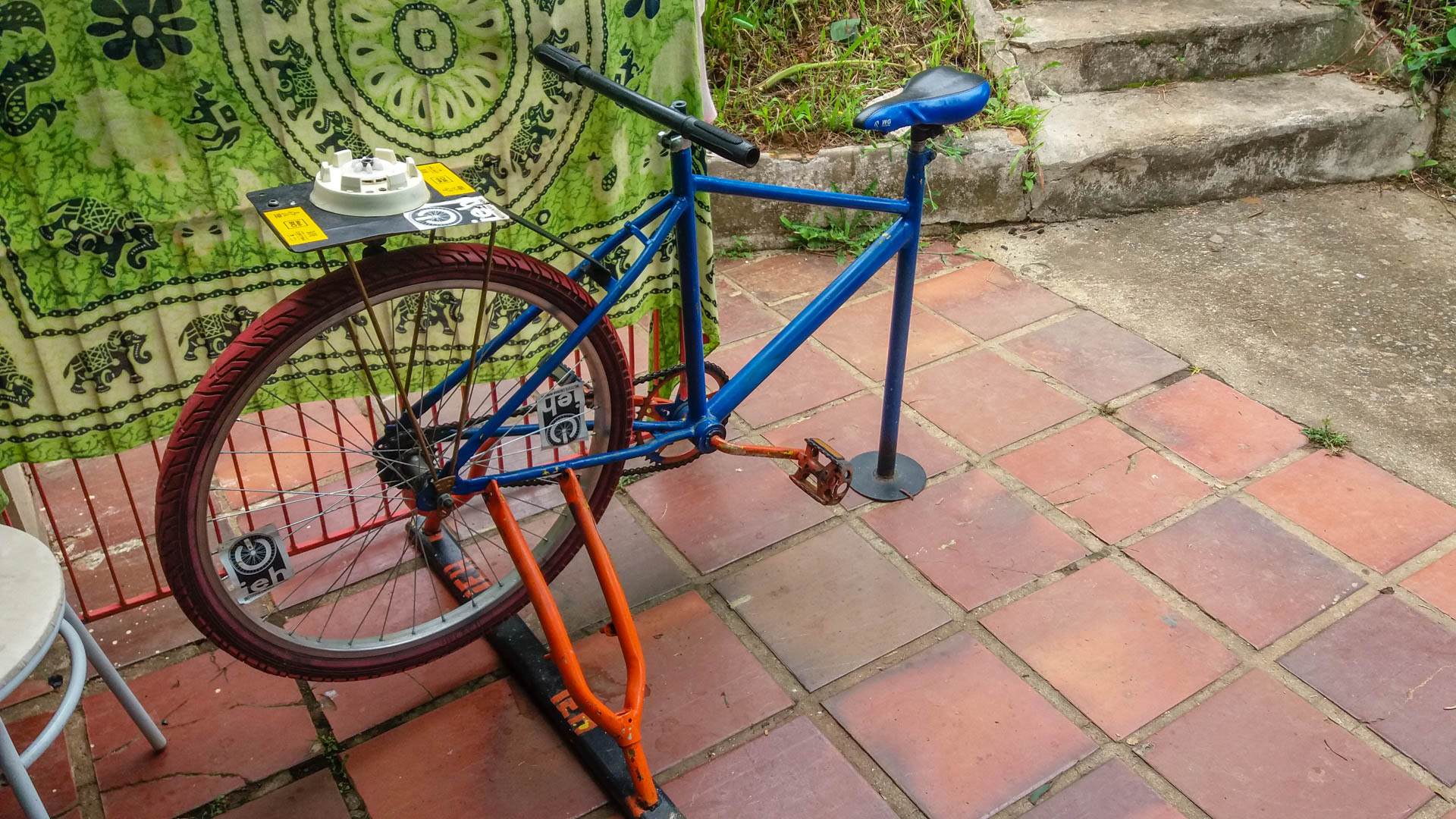 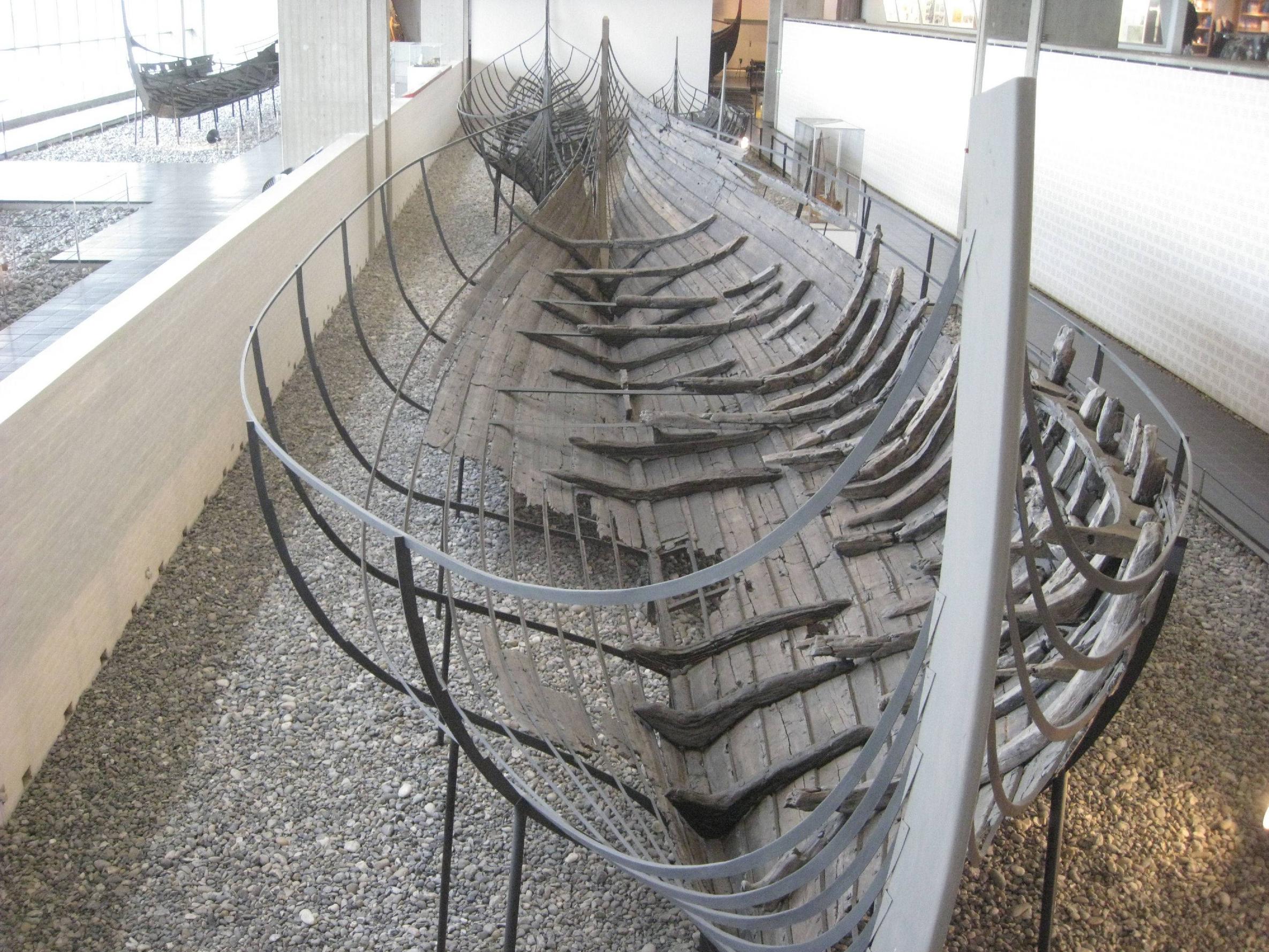 Photo taken by me on 28 September 2010 In Roskilde, Denmark, as that is where the museum is.

The workshop of the museum has made reconstructions to row and sail with of all the vessels out of this group. In my photo you can see 4 of the 5 boats in this group, if most not clearly. 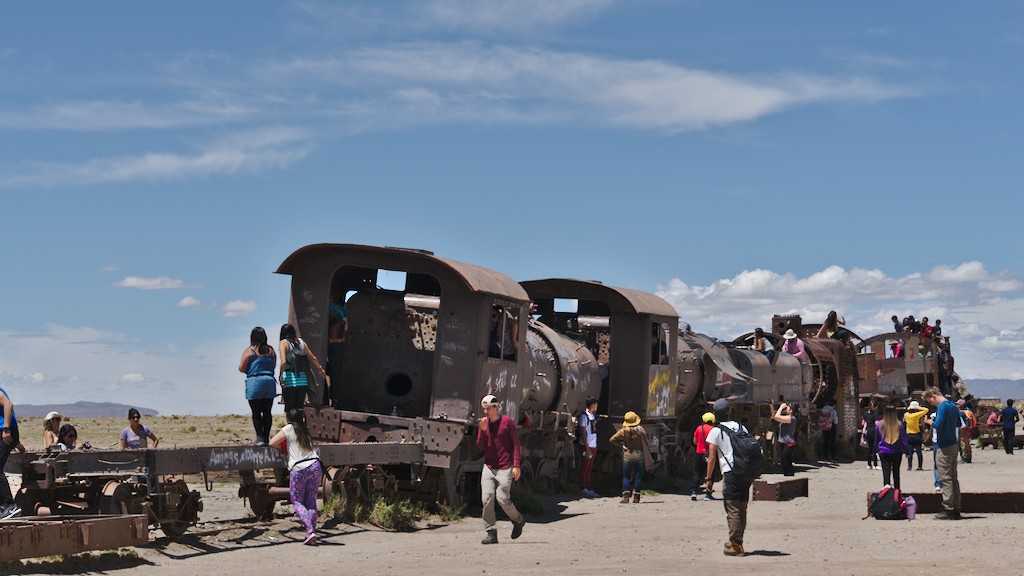 At the train cemetery in Uyuni, Bolivia, everything degrades quickly due to the salt in the air and the apparent fun of graffiti, but that doesn't prevent everybody from stopping by on the way to the salt flats. I took this photo on February 8, 2019. 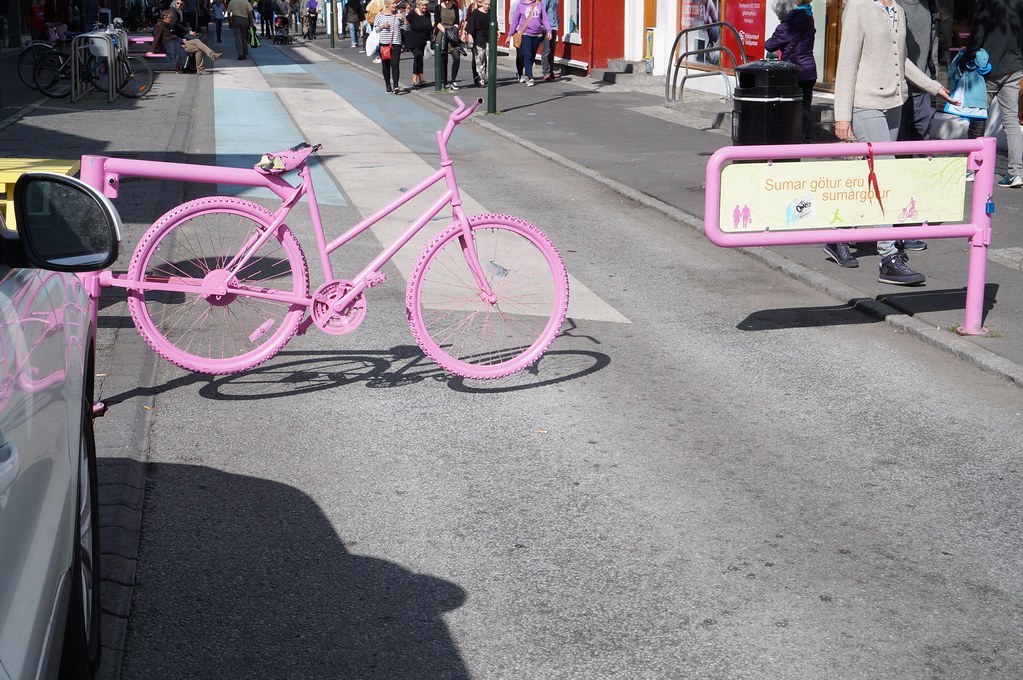 This bike isn't going anywhere anymore, but it's doing the useful job of keeping cars out of the main tourist street in downtown Reykjavík, where I spotted it on August 3, 2015.

As used in the Apollo moon landings to transport astronauts to lunar orbit. 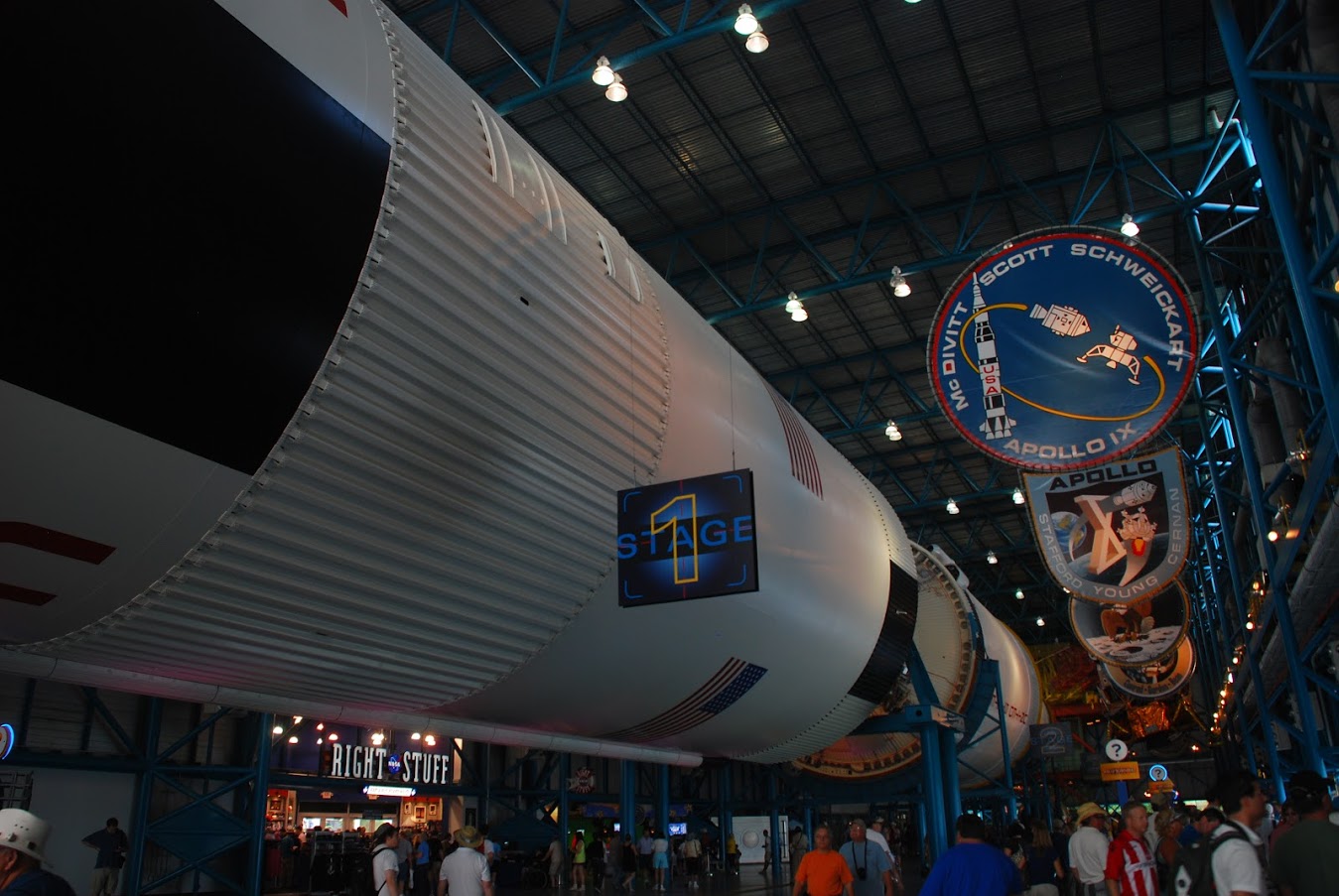 USS Bowfin (SS/AGSS-287), is a Balao-class submarine of the United States Navy named for the bowfin fish. Since 1981, she has been open to public tours at the USS Bowfin Submarine Museum and Park in Pearl Harbor, Hawaii, next to the USS Arizona Memorial Visitor Center. It was built in 1942, and decommissioned THREE TIMES - finally in 1971. 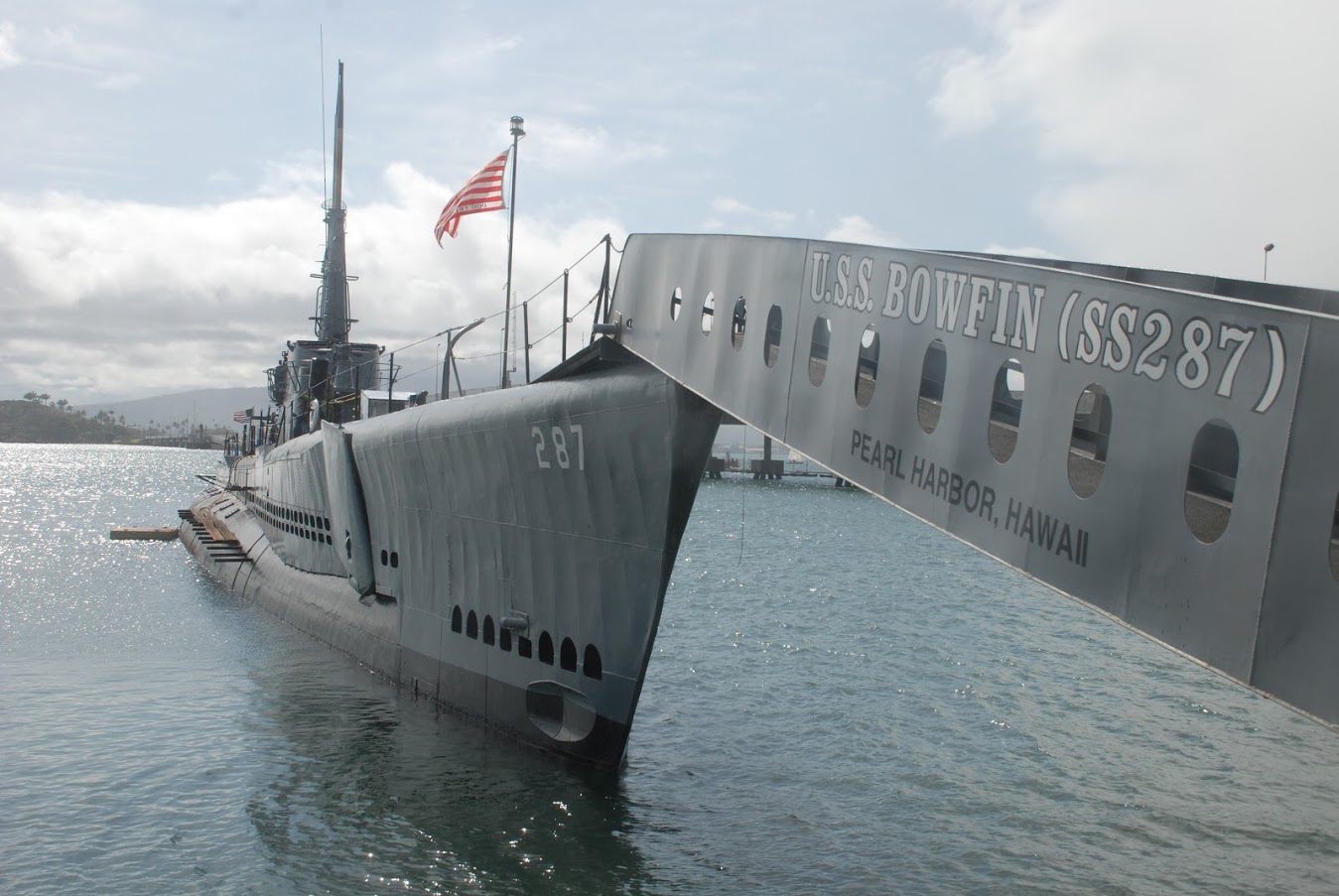 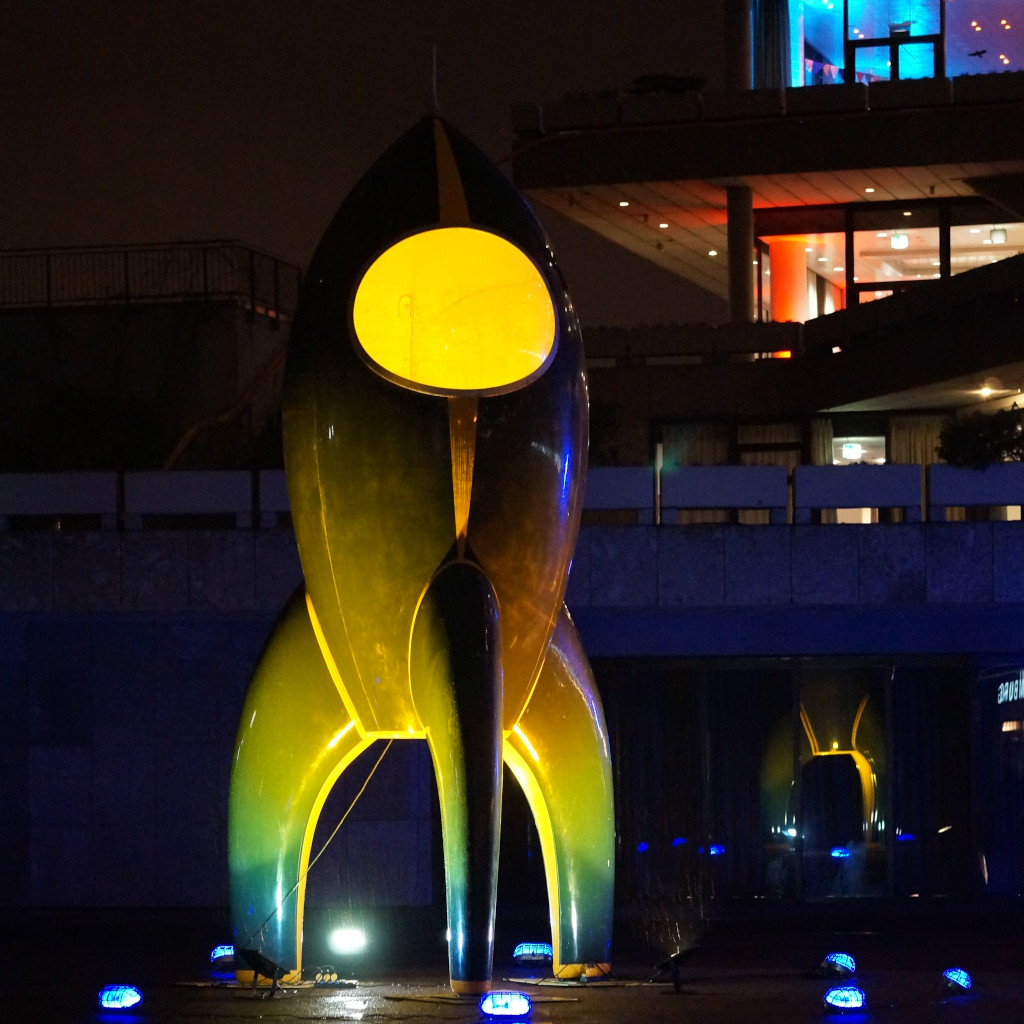 The Heart of Gold rocketship is the mascot of the Chaos Computer Club. It's hard to say if it's retired, exactly, but I've not yet met anyone who's been offered a ride on it. Maybe one day.

Mercedes-Benz T 80, a car that would be the world's fastest (well at least in 1940). Technically it was never used for travelling, but well, it's a mean of transport... 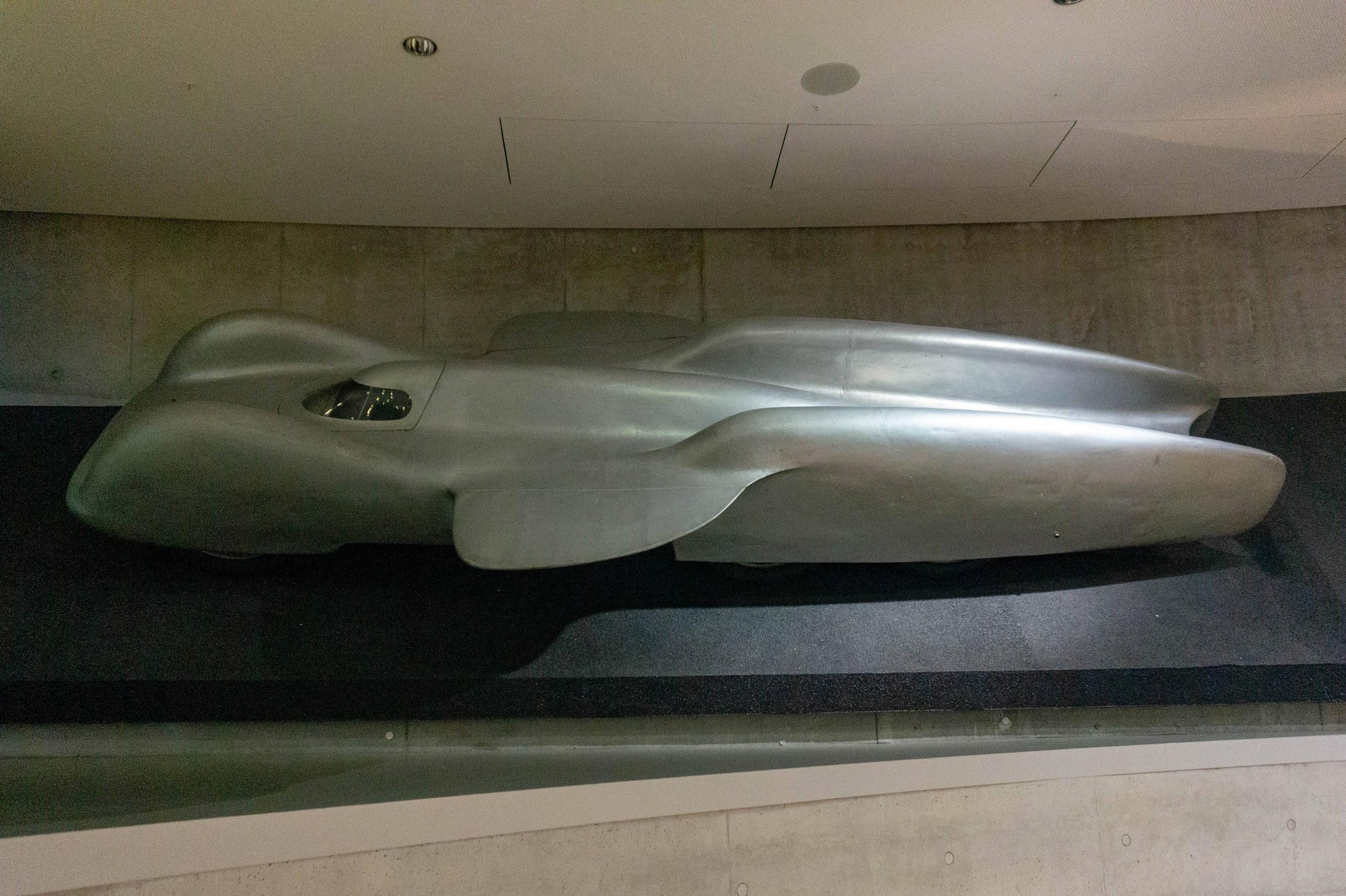 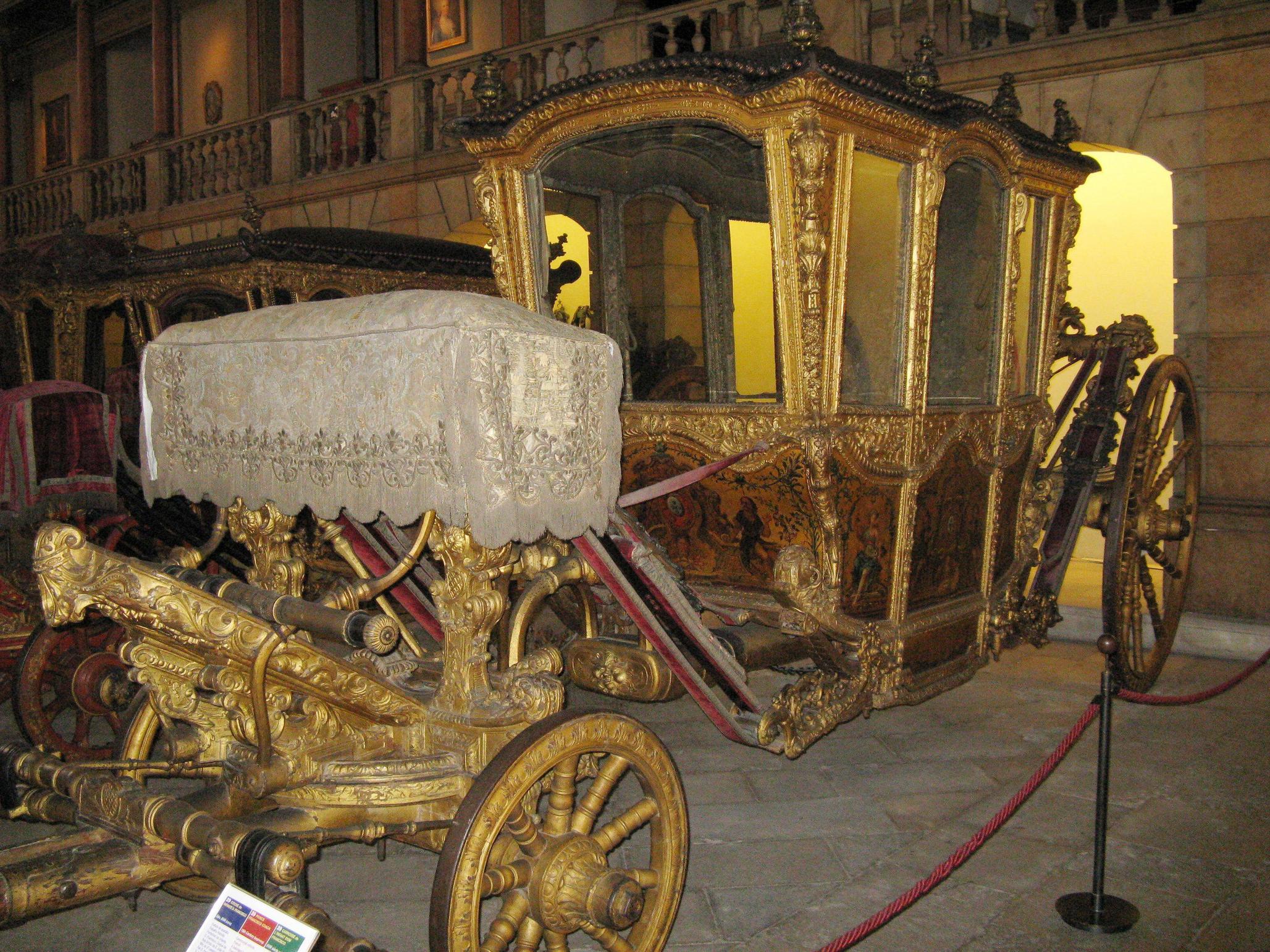 The coach is in the Museu Nacional dos Coches in Lisbon.

SpaceShipOne - with the Bell X-1 in the background, was an experimental air-launched rocket-powered aircraft with sub-orbital spaceflight capability. SpaceShipOne completed the first crewed private spaceflight in 2004. It's now in the National Air and Space Museum, where I saw it in Washington, DC, on 23 April 2013. 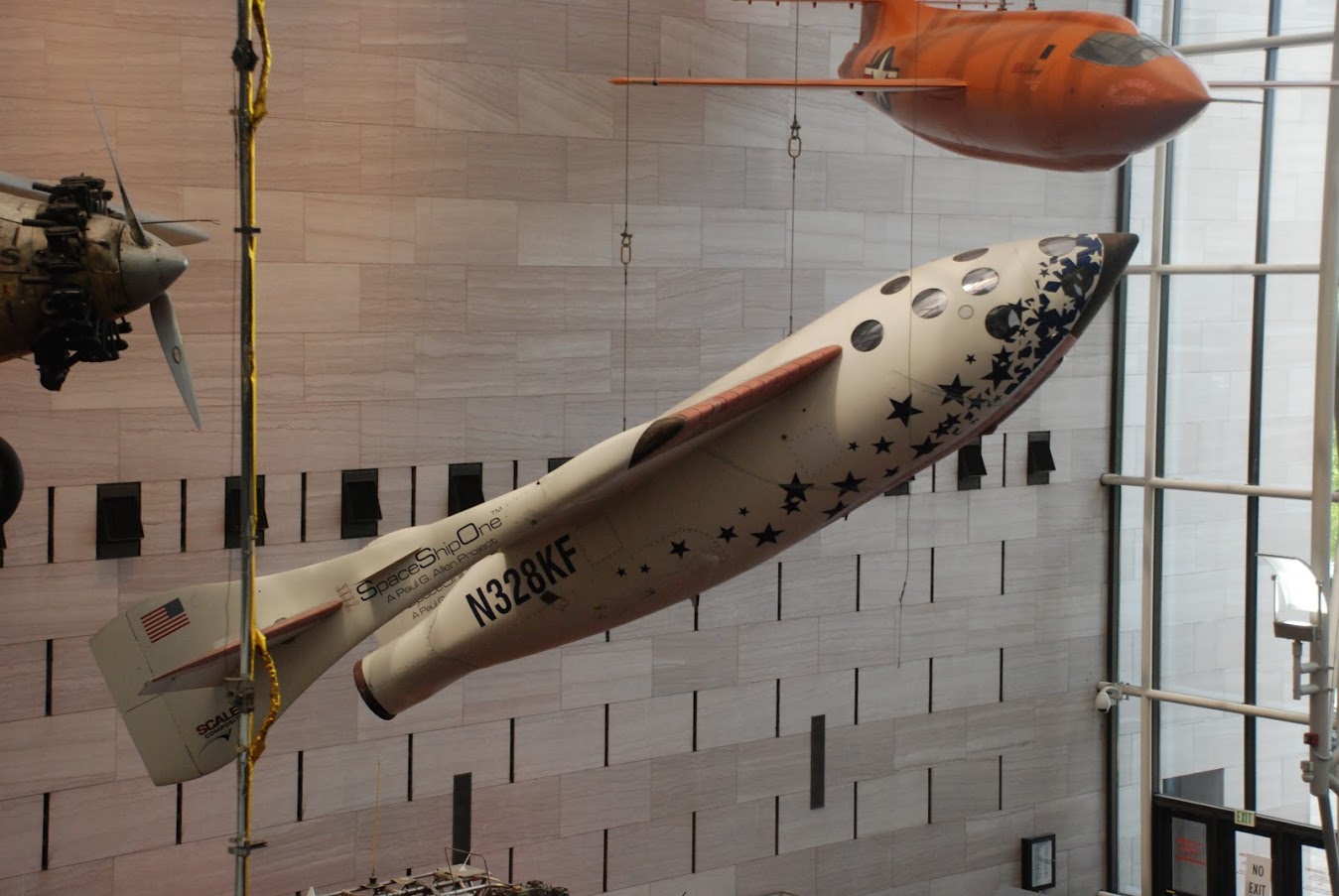 In Gaspésie (a maritime region of Quebec, Canada on the St-Lawrence gulf), L'Amiral used to be a tourist train. It is now just seating in Gaspé, showing off its nice face. 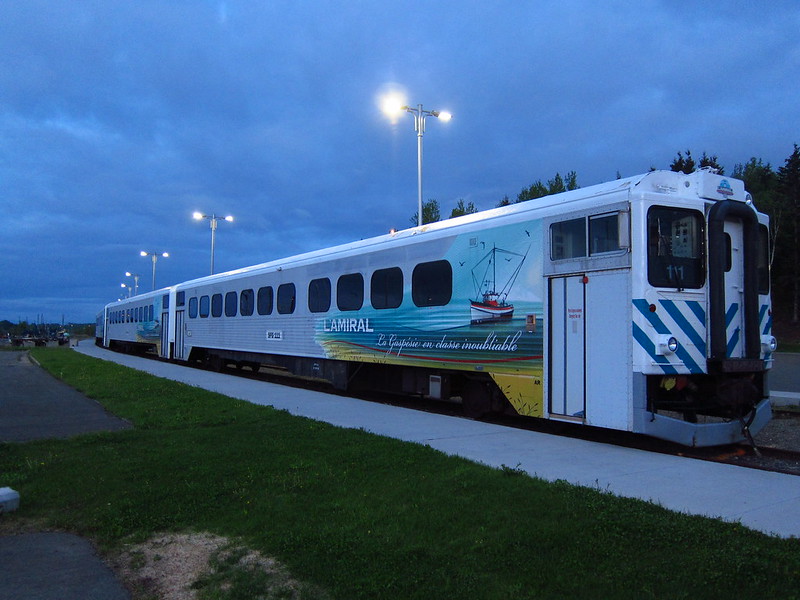 This replica of the original Golden Hind also circumnavigated the globe. Launched in 1974, the ship has been retired since 1996 and is now a museum. 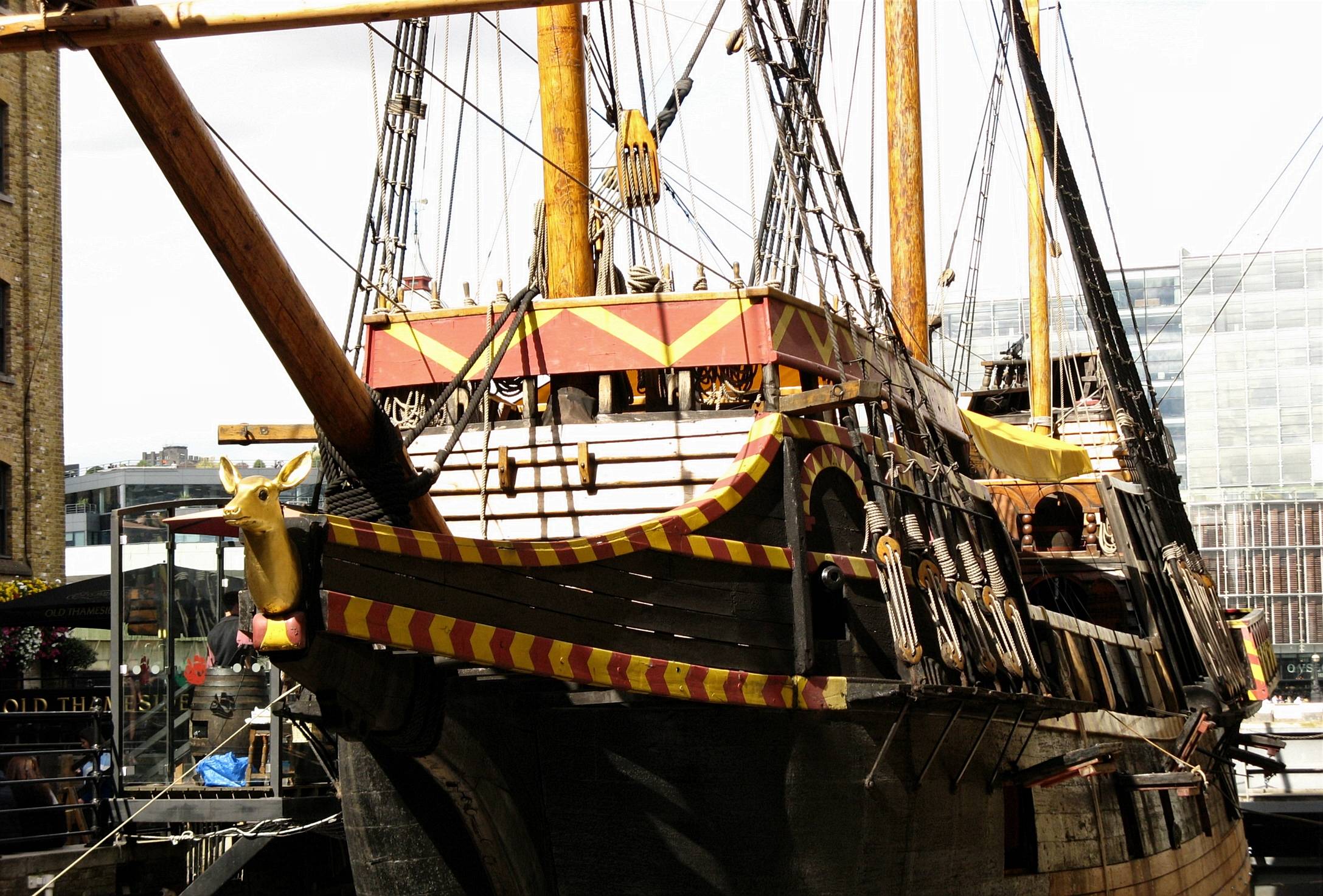 Taken by me at St Mary Overie Dock, London in September 2018.

The warship Vasa that sank on her maiden voyage in 1628. 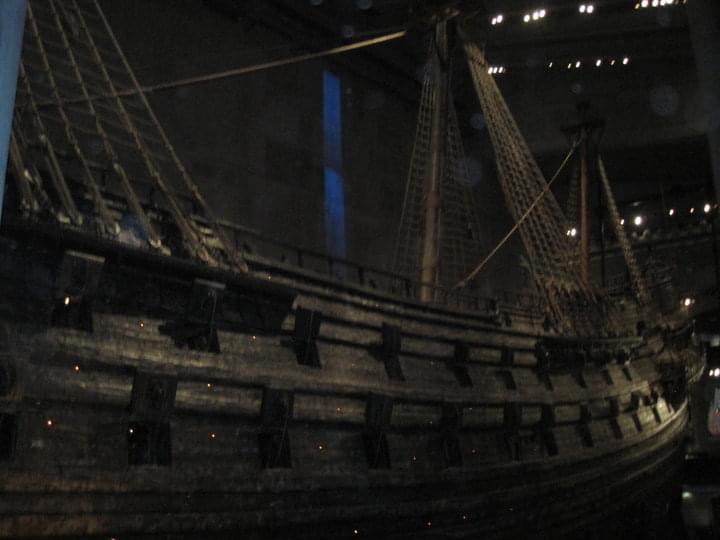 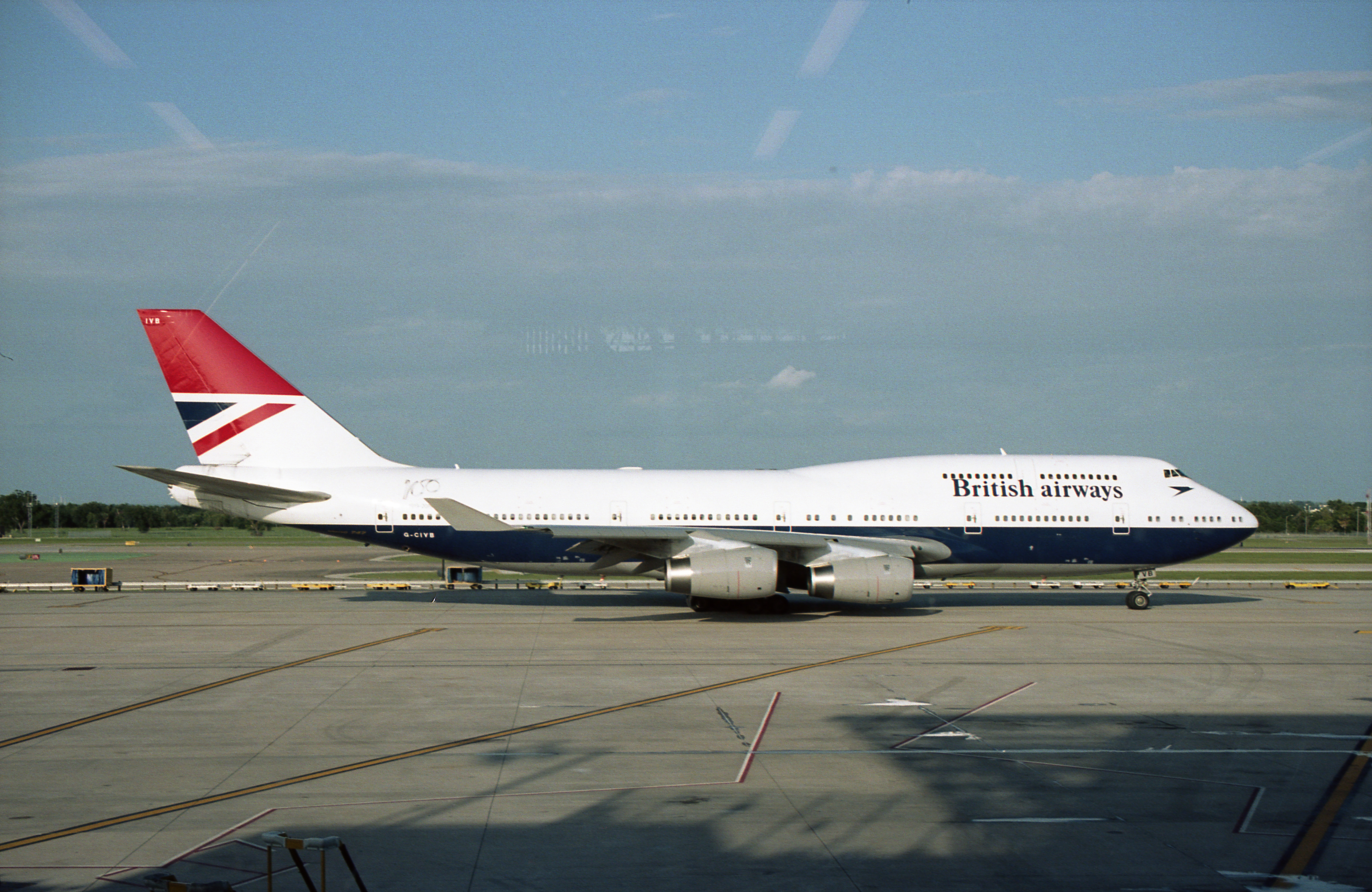 This plane also briefly flew for their subsidiary airline British Asia Airways, which was formed to operate flights to Taipei as the government of China (PRC) had a rule at the time prohibiting some airlines who fly there from flying to Taiwan.

Sadly, British Airways retired their entire 747 fleet in the summer of 2020, so this plane is no longer in service.

This Hawker Harrier can be found in the car park of the main Dyson office in Malmesbury, Wiltshire. It was purchased for display after it crashed into the Mediterranean Sea. 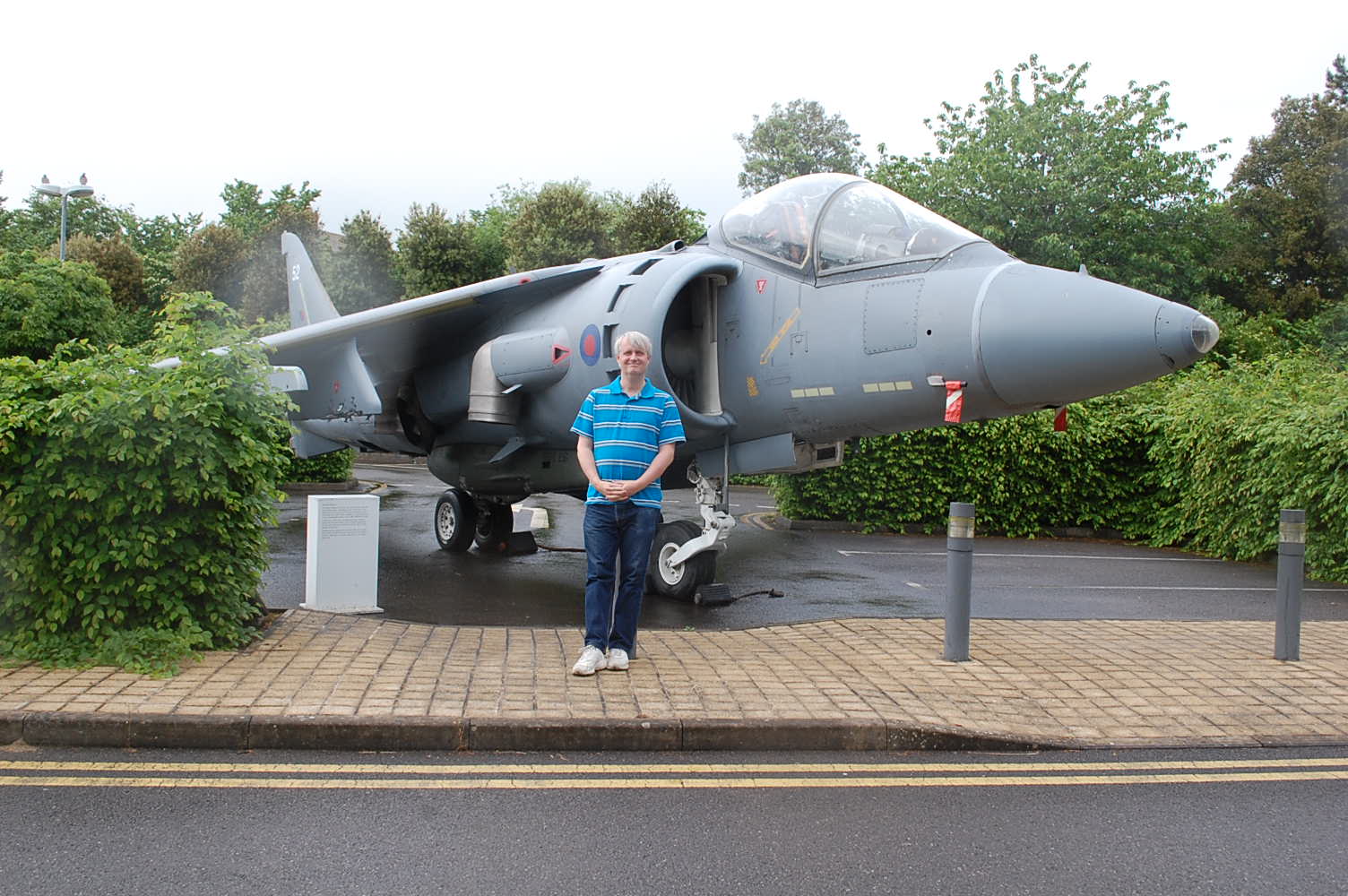 It was bought by the owner of K-W Surplus and is now permanently located in their parking lot in Kitchener, ON, Canada. 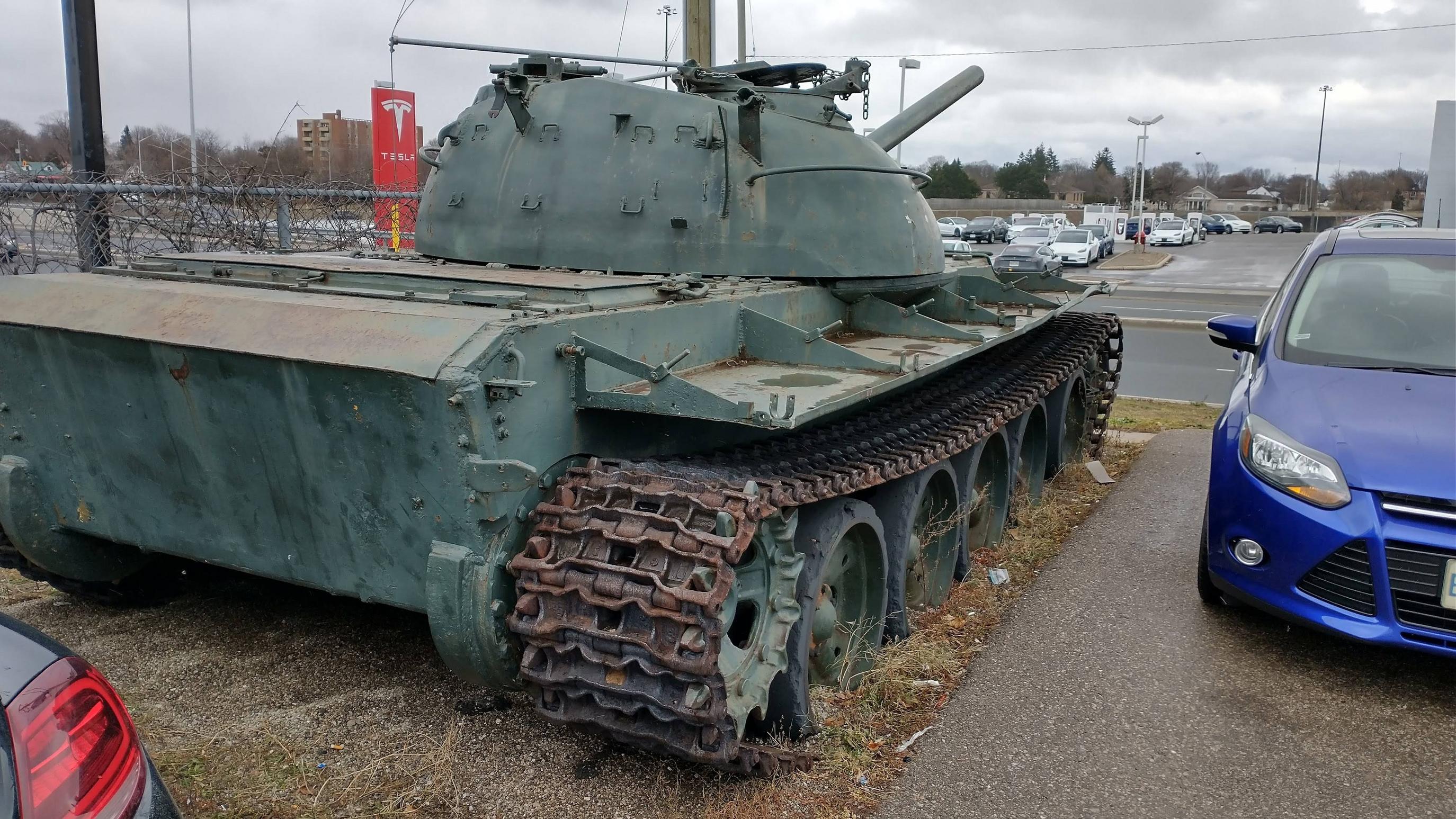 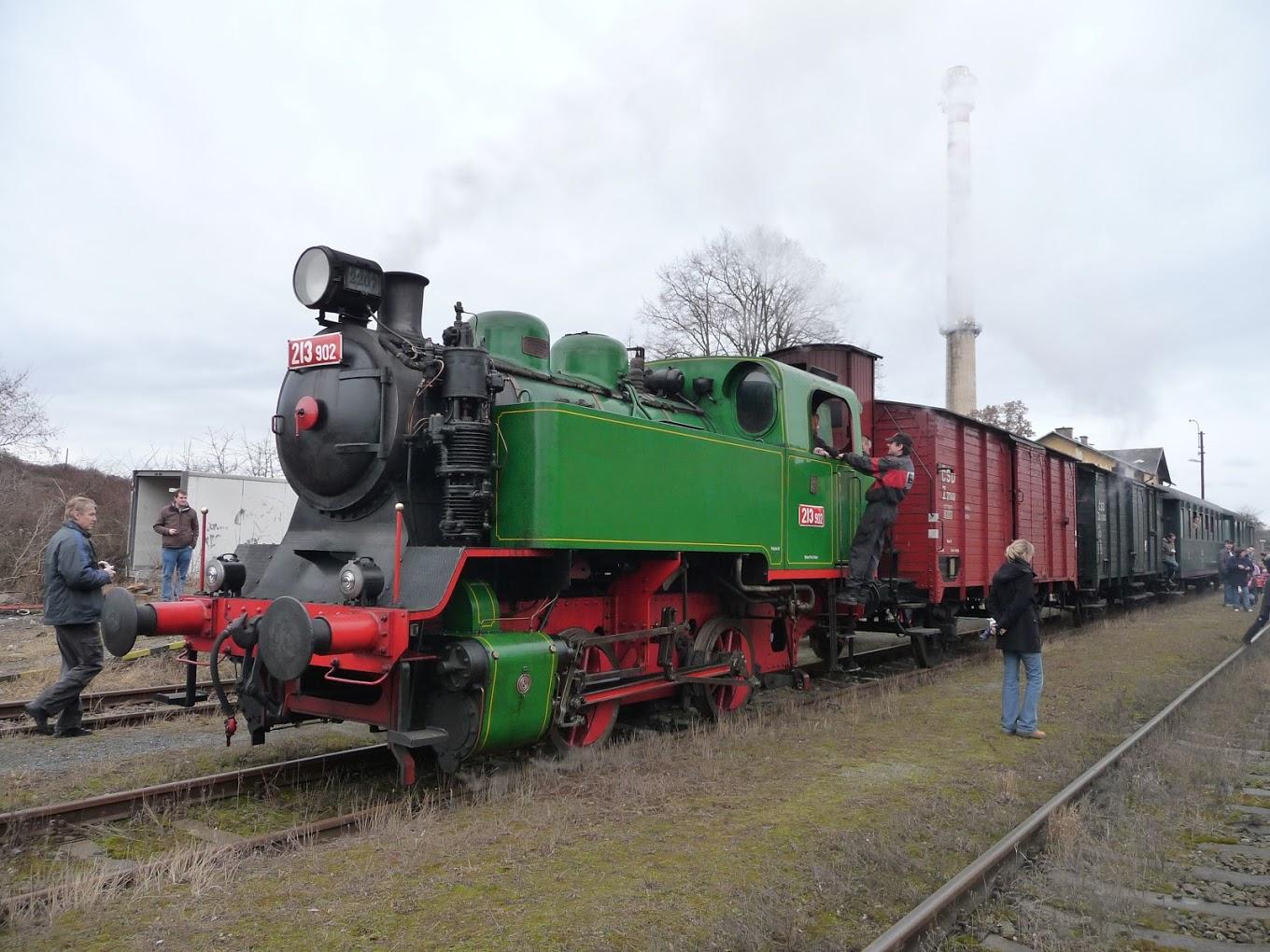 The Soviet B-39 Foxtrot-class submarine, also known as "Black Widow" or "Cobra". Now a permanent fixture at the San Diego Maritime Museum. Photo by me, May 2018. 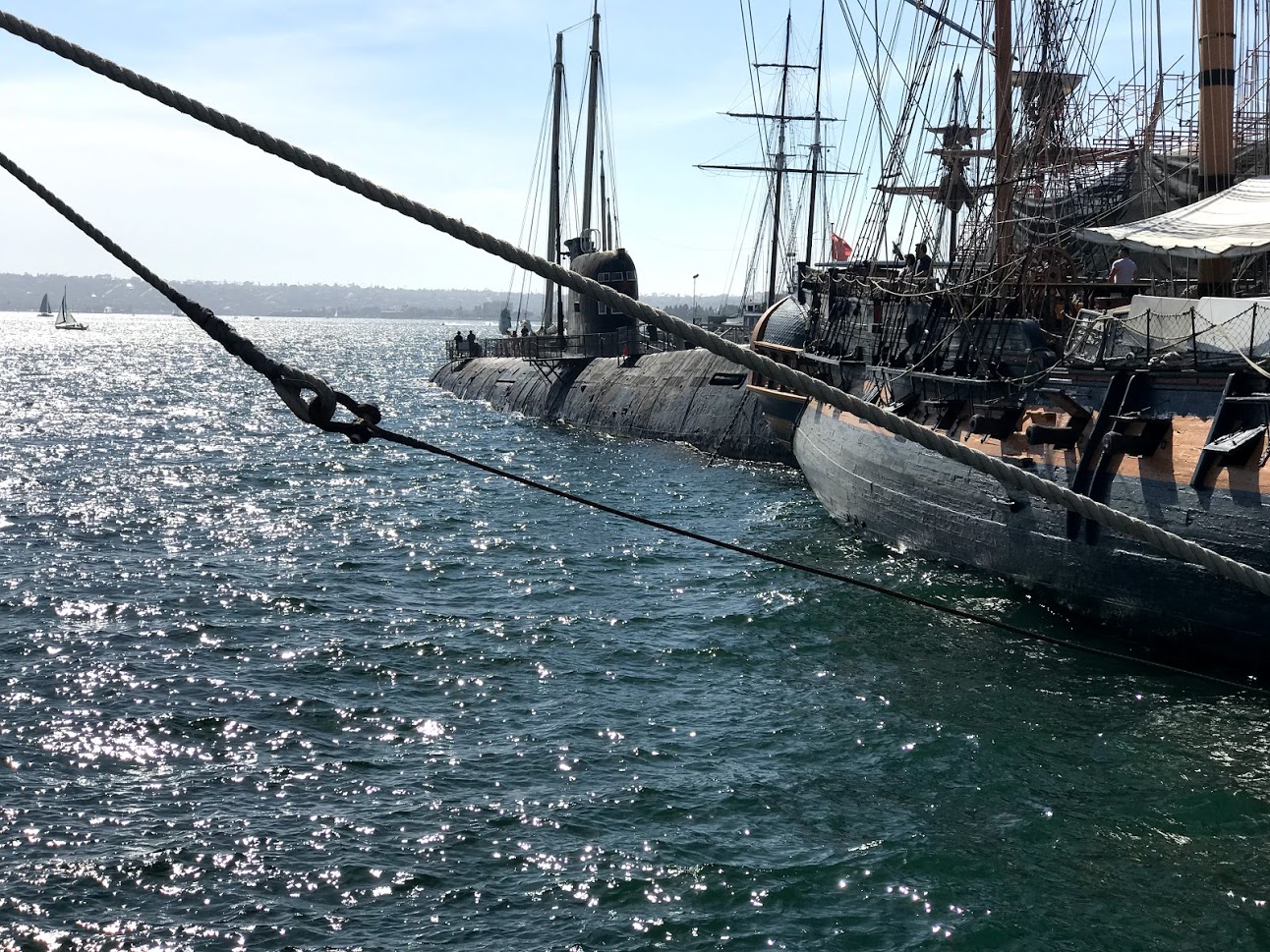 Competing with some other originally recycled bicycles above here, this one that I caught in Adamantas (Milos, Cyclades, Greece) in September 2019. 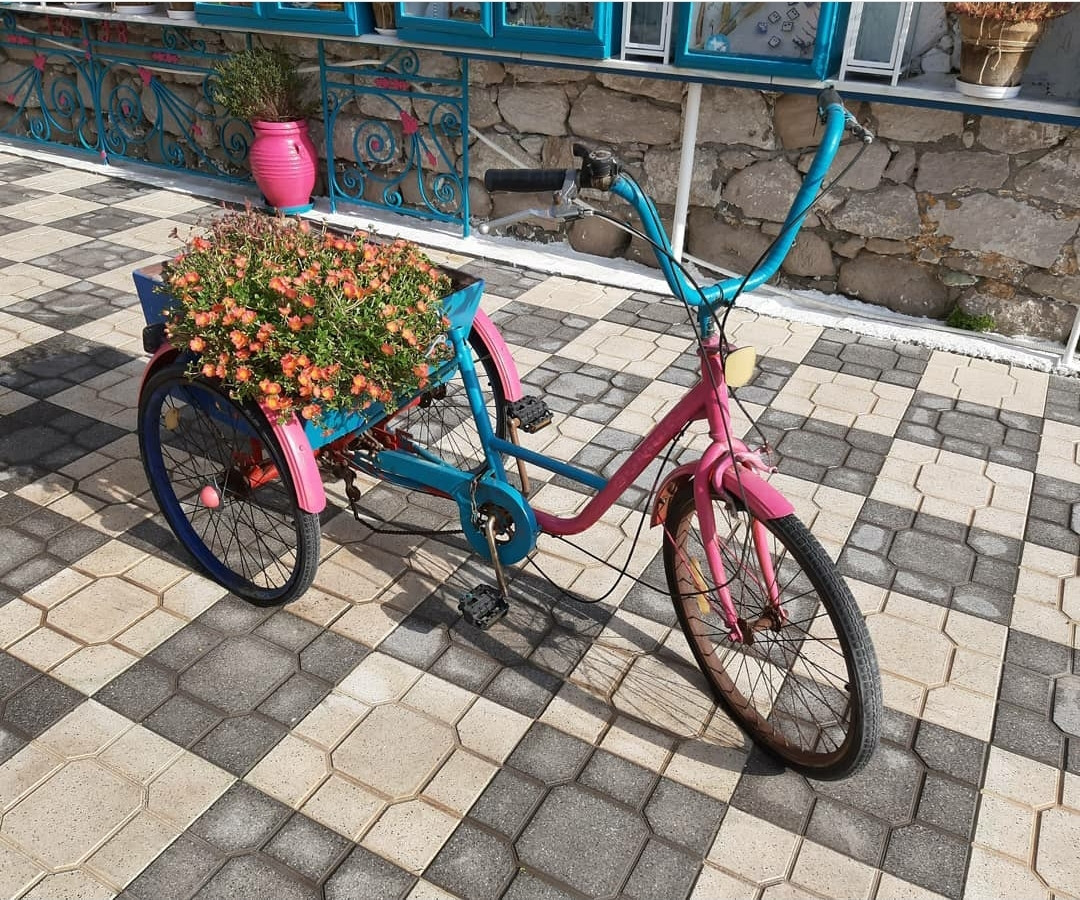 This is a former railway line with the left over bit of a station (or just a stop) called the 'Black Dog Halt' and the photo is taken over a gate which is in the shape of a train between two dogs. (I posted it here.) The plume of smoke is the handle to open the gate.

There are two retired 'means of travel' here, the railway line and the platform. 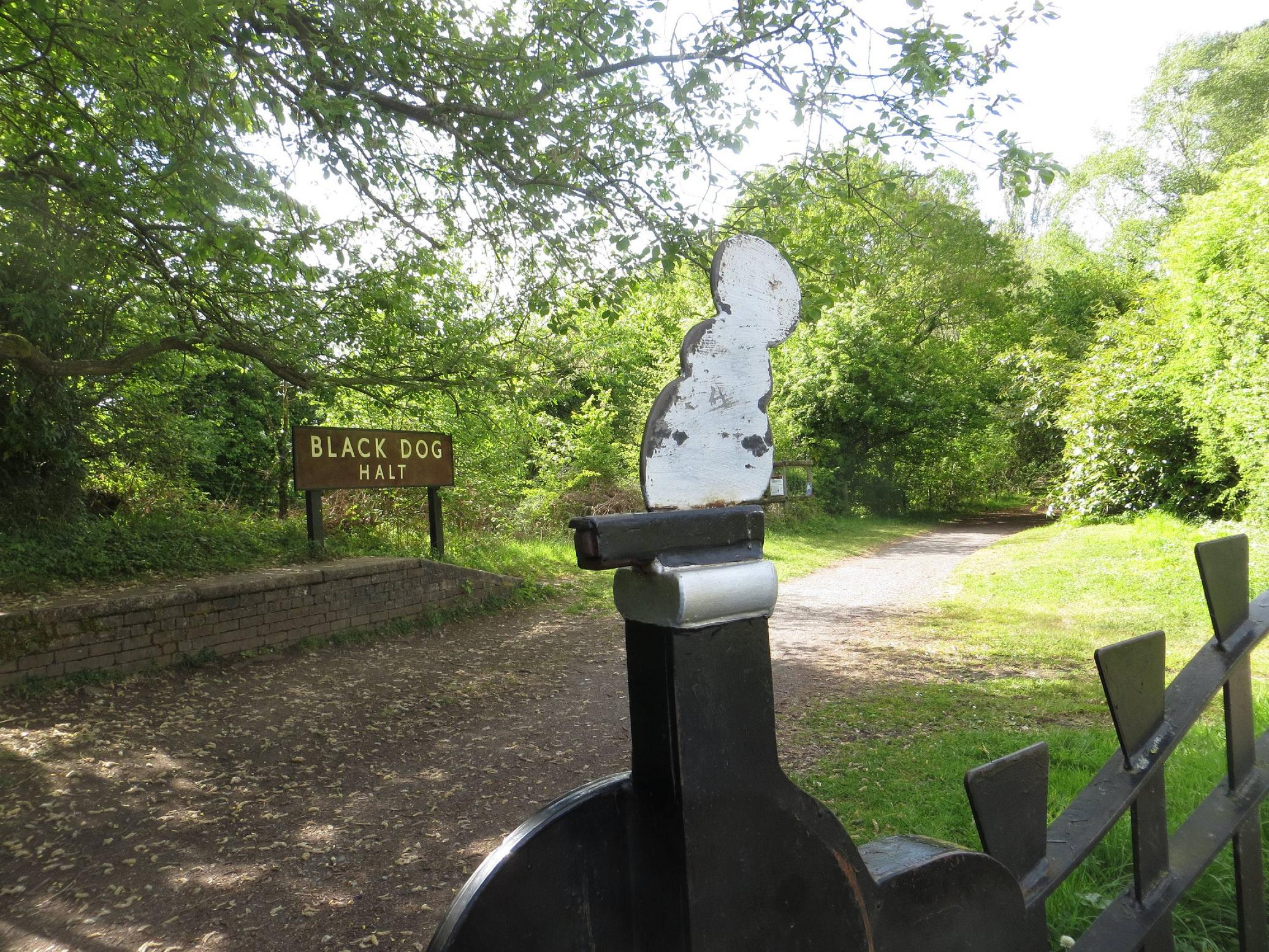 This photo was taken by me, 13 May 2017, near Bowood house, between Chippenham and Calne, Wiltshire, UK. 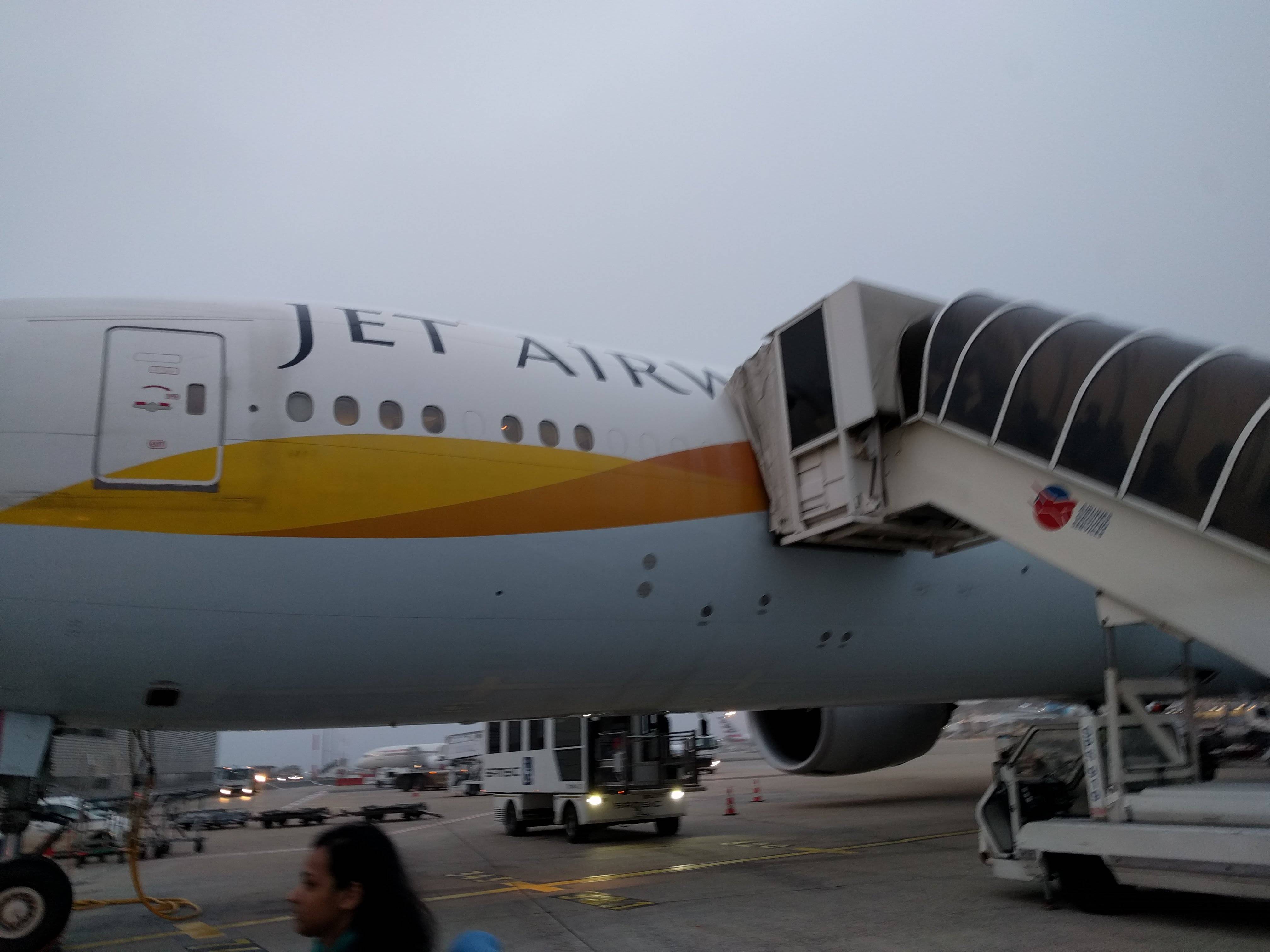 A Boeing 777-300ER belonging to Jet Airways, then the largest private Indian airline by international flights.

Jet Airways ceased operations in April 2019, and the entire long-haul fleet was retired at that time.

Taken in January 2018 on my smartphone, at Paris Charles de Gaulle Airport. 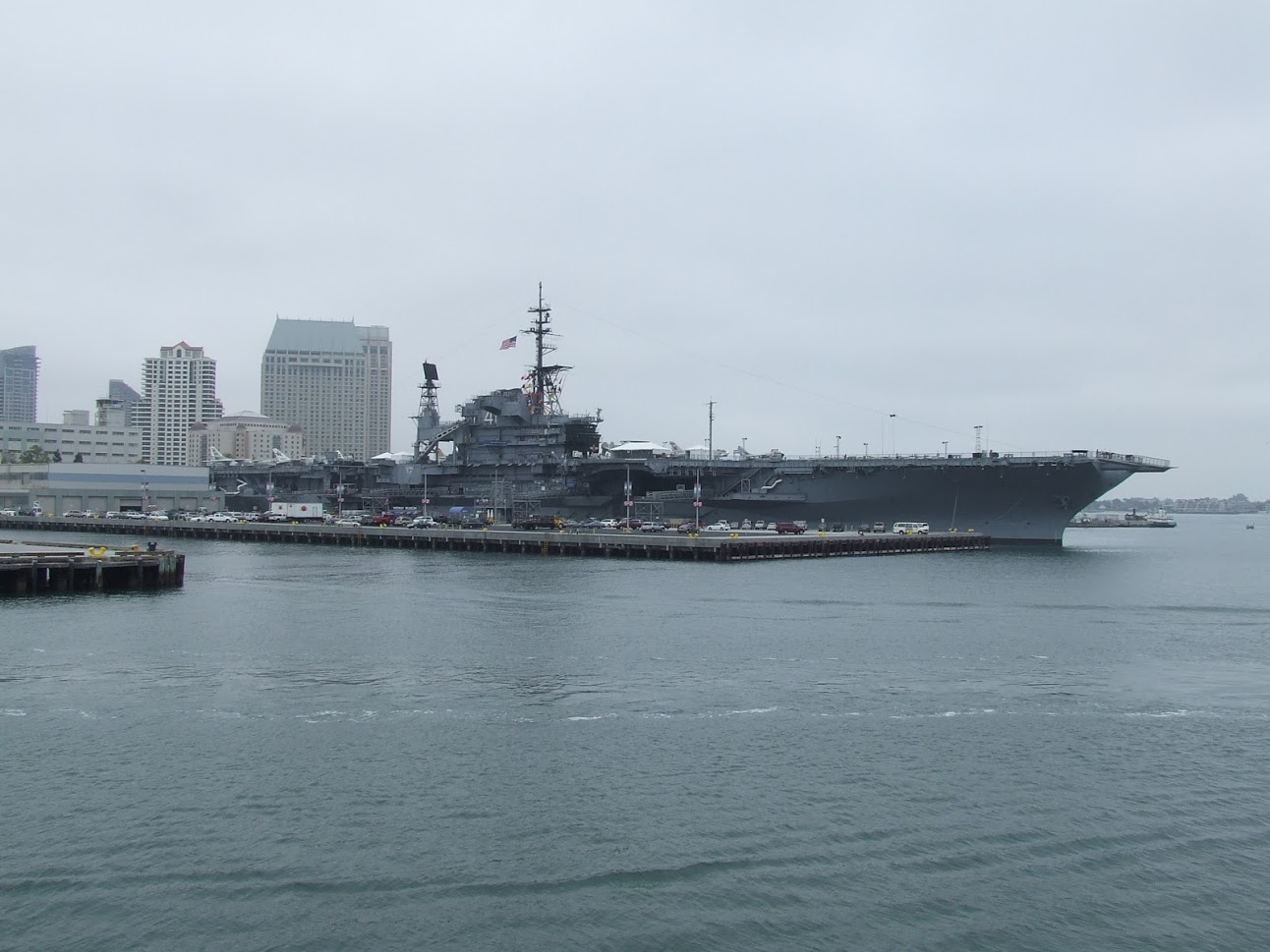 Excuse the grainy photo - The best angle I could get was of the screen showing the live video. From the deck (of the cruise ship) there were too many obstacles! Photo by me, Oct 2019. 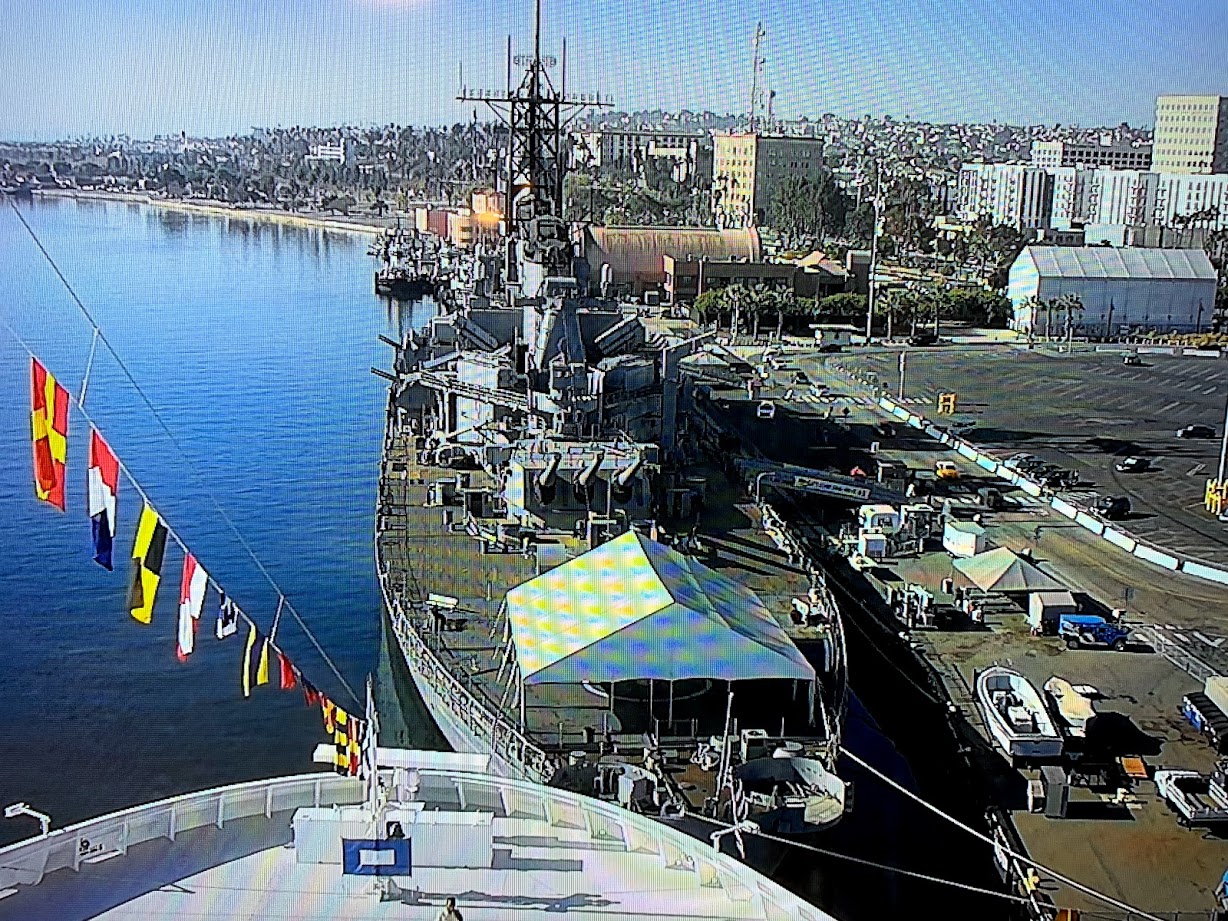