It is a wrong answer ... but how best to deal with it?

There seems no doubt the answer (mine) to How can I speed up the processing of my Romanian short-stay visa at the Romanian consulate in New York? is wrong. OP responded with a Comment:

Fortunately I did go over their heads and reported it to the visa center and was also encouraged to report this incident to the ministry of foreign affairs. In a few hours time, I got a call from the consulate that my visa was ready.

Whereas my answer includes:

Don't go over their heads

You might consider trying a 'higher authority', perhaps the Ministry of Foreign Affairs. Forget it. As @Gayot Fow has mentioned elsewhere on TSE (admittedly not for Romania) the procedure can be expected to be that any specific complaint would be forwarded to the Embassy in NY (if you are lucky). This may achieve further delay.

Admittedly my answer was on the basis that contact could not be established with the issuing authority (I can't reach their consulate by email and when I tried calling, the prompt is in Romanian and there is no option to choose English.) and it seems it was that authority (or its agent) who advised contacting the Ministry of Foreign Affairs (action which appears to have been very effective) rather than OP doing so without prompting.

I think the answer is still in general sound and that the above may be no more than the sort of exception that TSE can't really cater for. Perhaps somewhat akin to mentioning a train route that, on the day OP wants to travel, happens to be out of action due to a landslide.
My answer was tailored to Romania but would have been much the same, in similar circumstances, for any country. And … now another country has cropped up. I am in a quandary what to do for the best. Possibilities seem to include:

Gayot's advice comes in a question about a Schengen refusal wherein a frustrated OP asked...

I don't know where and how I should complain. My husband has been to Europe 9 times before. 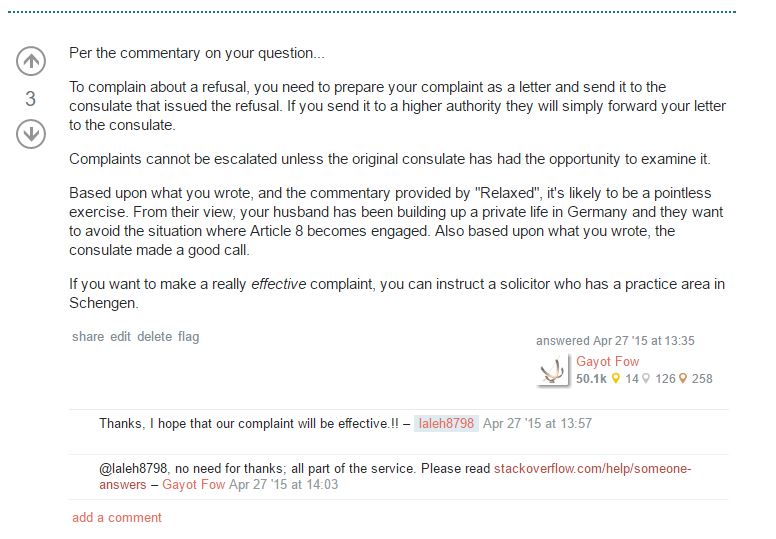 I have deleted the 'answer' in question and replaced it with a copy of a Comment from OP.

10
Recent questions about marriage and visa
3
Should I be getting this warning "you're in danger of being blocked" and should my second question be marked as a dup?
6
Improving duplicate questions
7
Can/should we deal with requests for suggestions for presents within TSE but off the main site?
5
Do we delete answers just because they are wrong?
9
Proposed canonical on V 4.2 a+c (and sometimes e)
3
Deletion of questions from new users without explanation
16
Answer edited to complain about downvotes and declare them "wrong and misleading"
5
User experience for new users who post questions as answers
5
How to include chart or table