what if a question is off topic and the stackexchange network it ought to be in doesn't appear?

what if a question is off topic and the stackexchange network it ought to be in doesn't appear? does that automagically mean that it is on-topic?

seems like there ought to be a drop down menu where you select the appropriate stackexchange network instead of stackexchange trying to auto magically figure it out.

Here's a picture of what I mean: 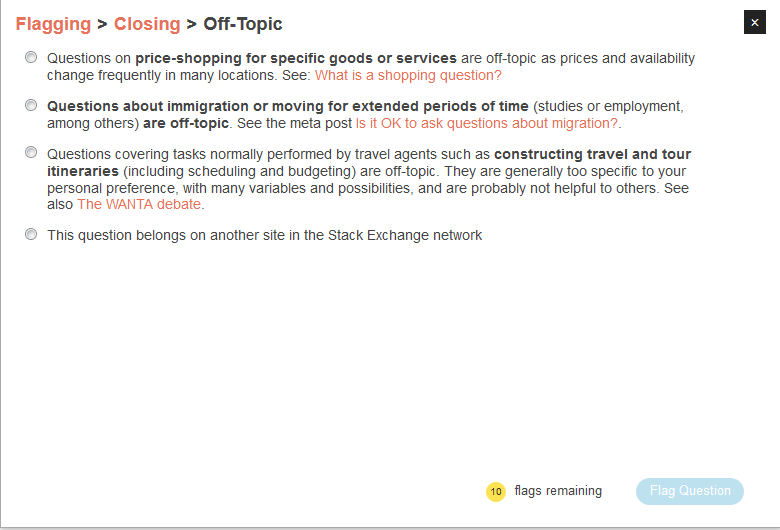 I think the question is off topic but not for any of those reasons. I click on the "This question belongs on another site in the Stack Exchange network" and see this: 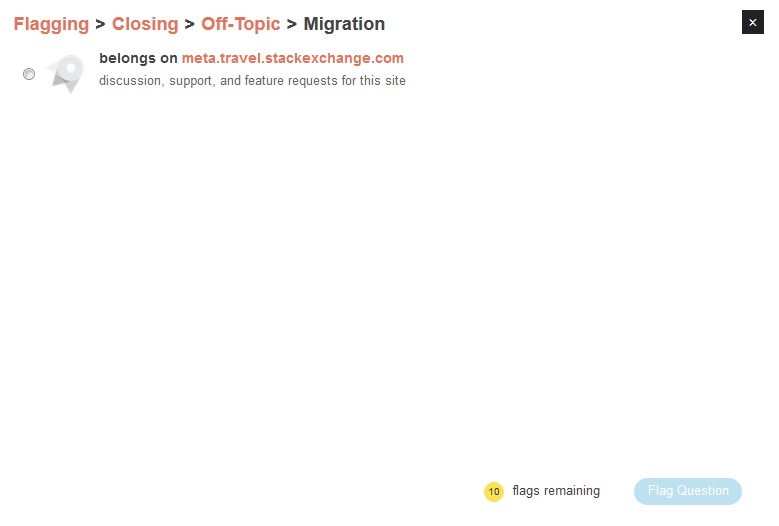 So what do you do when none of the alternative stackexchange networks it's letting you pick from are good matches?

It comes up all the time, with any question. Basically, only the mods can move it to another SE site, while the rest of us can vote to move it to meta. So if you think it should be on a different SE site completely, you just vote to close as off topic, and then flag it for a moderator and suggest that it be moved to a different site.

As Mark says it does come up all the time and only the mods can move them.

Apparently it used to be open but got abused on the big sites like StackOverflow -> Programmers.SE.

But there is something else.

Each site, at least graduated sites, can have I think five sites that can go into a list of sites to migrate to.

I don't know the details but I'm sure the moderators can request the SE staff to get sites added to the list. By default the list only has the meta site.

I made a database query a few days ago to calculate which other sites we have the most migrations to and from to see which sites might make the most sense to put in the list. It turns out we had far fewer migrated questions that I thought.

So I would say:

Ask a specific support question about getting a specific site added to the list. It will be discussed and voted upon, then it will be to our mods to figure out how to get SE to add it.

It is possible to have such an option, but there are two problems:

The list has to be closed, and we (as a community) have to choose which to include. For example, we get a few questions here that should be on Finance.SE; but do we really get enough that 'migrate to Finance.SE' is a worthwhile option?

And there is definitely no way for non-mods to suggest transfer to a site that is still in beta. This has caused frustration in many places, but it is clear Stack Exchange policy, probably because the scope of a beta site is still not well-defined.

Anybody with a specific suggestion for 'transfer to this site' would, I am sure, be welcome to ask a meta question.

Not the answer you're looking for? Browse other questions tagged discussion scope .

8
Help design our first-draft FAQ
7
What qualifies as a "list" question and what doesn't?
1
Upvoting of off topic Questions
31
Rule 1: Be nice!
5
Are expat questions on-topic?
12
What is 'too broad' about the question about firearms in the USA?
20
inconsistent standards for what qualifies as a travel question
1
Is it OK to have the same content in two different answers, if it is relevant to both?
6
Should we close "What would authority/company X do" as primarily opinion based or as off-topic?
2
Have we done something wrong, that we get such totally travel-unrelated question?